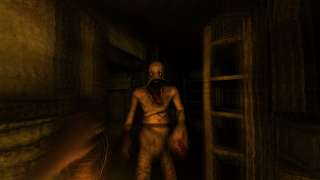 The purveyors of horror over at Frictional Games, developer of Amnesia and SOMA, have been teasing their next project for around a week. It remains a complete mystery, but there's a weird pulsating thing at the centre of the Next Frictional Game website, and now it's started to grow.

When we first took a look, the object looked a bit like a neuron. Frictional has been quiet on social media, so the only clues were on the site, which was set up all the way back in the days of the developer's first game, Penumbra, and has been used to introduce new games ever since.

The developer hasn't shared any additional clues since it started teasing the new game, but the neuron has evolved into something else—which also isn't giving much away. Spotted by The Gamer, it's still grey and pulsating, but now it looks like a cell.

Frictional might be growing a monster, but typically the studio's creatures don't like the spotlight, instead waiting in the shadows to scare the shit out of you in the game, so I'd be surprised if we got a monster reveal straight away. A sci-fi setting would be a good bet, but at this point there's still not much to go on.

It's taken a while to get from neuron to cell, so don't expect answers quickly. SOMA came out in 2015, though, so you should hopefully be used to waiting for Frictional to scare you.