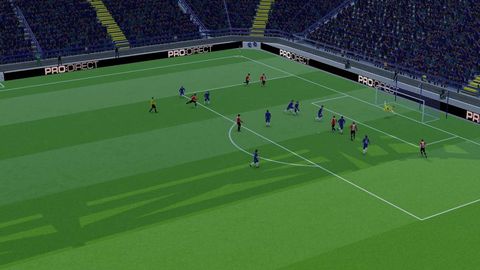 The quintessential football management sim is back with its most ambitious undertaking in years.

It’s been 18 months since I signed for Celtic. During my first season, I impressed with a clean sweep of domestic trophies and qualification to the knockout stages of the European Champions League. At this point, this year’s campaign promises much of the same, and the board, press and fans love me. But things are boiling over in the dressing room, and I’m fast losing the confidence of my players.

How did this happen? Six months earlier, star man Tom Rogic turned in a few dodgy performances and was dropped to the bench. Several weeks later he came knocking, unimpressed with his situation. I promised him more first team football, but failed to keep my word. And as one of my most influential players, my untrustworthiness sparked an internal revolt. To make matters worse, the media has now caught wind of our troubles.

Introduced to the series this year, Football Manager 2018’s new Dynamics system is its most distinguished feature. By forcing players to consider the wellbeing of their squad past the pitch and into the dressing room and beyond, success is no longer just about winning games—it’s also about keeping your team happy behind-the-scenes. We’ll get to the particulars of how that works later, but this new consideration coupled with external pressures from the media—not to mention some unrelenting make-believe social channels—quickly cements this year’s instalment as the most true-to-life FM yet.

At its core, Football Manager 2018 follows its forerunners. You’re asked to pick a team from a pool of thousands, assume control, manage a squad, and try to win as many games as possible. What makes each annual entry stand apart is how well Sports Interactive iterates and improves on the formula—be that tinkering with its user interface or in-game match engine, adding new features that improve the game’s AI, or offering more in the way of stats, data and analysis. Football Manager 2018 succeeds by adding to almost all of the above, and streamlining what already exists.

Even with an overhauled 3D graphics engine, Football Manager 2018 should run on the majority of modern systems. It ran without issue at the highest settings/1080p on my GTX 980/8GB RAM/Intel i5-6600K.

NB—Match speed during and between highlights can be adjusted, as can in-stadium camera views.

In recent years, feature visibility has been an issue in FM. Mastering multi-tiered panels, pie charts and micromanaging staff has steadily replaced abstract features such as slider bars and drop down menus, as the game strives to mirror the real life roles and responsibilities of running a football club. In practice, newcomers are met with mechanics that resemble those of an RPG while veterans are asked to build upon assumed knowledge. This might see you overruling a physio’s recommendation to rest a player who instead pops up with a last minute winner in a cup final. Or maybe it’ll have you storming out of a press conference after an unexpected derby game defeat. All told, these incremental nips and tucks make for a more credible game—but navigating your way around this ever-growing network isn’t always straightforward.

FM 2018 makes a concerted effort to simplify these processes by fleshing out existing features or by presenting them in a more coherent manner. The overhauled scouting system is a perfect example of this, which now makes tracking potential signings easier than it’s ever been. The Scouting Centre houses all the information you’ll need to bring players in, and lets you give and receive orders from your chief scouts and data analysts. Scouts will present snapshot-style report cards that focus on the most important traits of would-be incoming employees—and a new easier-to-grasp ‘scout recommendation score’ that ranks players 1-100 replaces the old, at times ambiguous, star rating system. For the first time, scouting has its own budget too, which comes at the expense of your transfer and wages allocation.

The same applies to the new Medical Centre which is designed to not only track injuries, but to help players understand why your star players keep coming a cropper—something which seems to interminably upset the game’s wider community. Introduced last year, sports scientists now play a more important role as they provide detailed information on the fitness of your team, how injured players are recovering, and the risks fit players face of breaking down. It’s up to you to adjust your training and match preparation to suit—even if you feel your top-paid left midfielder is ripping the piss out of that supposed thigh strain.

On the pitch, Football Manager 2018 boasts a new 3D graphics engine. And a number of UI and HUD tweaks improve how you interact with your team. New motion capture animations help the DirectX 11-supported engine (previous games supported DirectX 9) convey more realistic interpretations of matches, and a revamped tactics system offers visual cues when tactics are failing. This lends more importance to your decisions and is a simple yet clever addition that bolsters the minute-to-minute credibility of each contest. As such, you’re often forced to adjust strategies on the fly despite the time spent ‘perfecting’ them in the previous evening’s pre-match tactical briefing.

Off the pitch is where the Dynamics system shines. As touched on above, in FM 2018 success in the dressing room affects success on the pitch. A fractured team is less likely to gel on match day, and, via its own dedicated sidebar tab and corresponding window, you’re now forced to balance ‘Match Cohesion’, ‘Dressing Room Atmosphere’, and ‘Managerial Support’. Each criterion is interlinked: winning games boosts Match Cohesion, which boosts Dressing Room Atmosphere, which boosts your team’s Managerial Support, which makes players try harder to win games, and so on.

A ‘Hierarchy’ screen ranks players by influence in the dressing room, wherein social groupings are determined by a number of variables—be that nationality, time spent at the club, and/or age, among a number of other factors. Upset a team leader or highly influential player and be prepared to pay the price.

In the aforementioned scenario, I overcame the turmoil by reinstating Tom Rogic whereafter his pals eventually fell back in line. In a separate save, I reshuffled my team entirely, favouring those players who were against the revolt, and dropping some of my most authoritative figures along the way. This included club captain Scott Brown, who wound up furious with me and my management. Complaints were made behind my back to the powers that be, and before I knew it I was unemployed and out on my arse. Celtic clearly weren’t interested in enforcing the ‘no player is bigger than the club’ philosophy here. Good riddance.

If Football Manager is about holding a mirror to real life football management then the story-generating Dynamics system is perhaps its most sophisticated feature to date, and an insight into where the series is heading. Real world considerations will always inform the series’ development—not least fairytale successes a la Leicester in 2016, world record-breaking transfers such as Neymar’s £200 million move to PSG this summer, and the inclusion of openly gay players for the first time in the series’ history—and its increasingly personable approach will help it shake the ‘glorified spreadsheet’ jibe once and for all.

It’s not perfect—despite the Medical Centre’s best efforts, injuries do seem to occur more regularly than in reality, the 3D engine’s animations are still at times a little janky, and the inability to carry over saves year-upon-year will forever be my biggest bugbear—but Football Manager as a series is in a great place, and FM 2018 is worthy of its praise.

Is this Football Manager’s most ambitious instalment yet? It’s certainly the most well-rounded in recent memory. Ask me again in 12 months’ time, once my save file has inevitably racked up hours into the hundreds. And by that time I might have won back the dressing room.

The quintessential football management sim is back with its most ambitious undertaking in years.