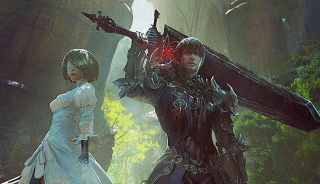 Final Fantasy 14 has another big update looming. Called 'Vows of Virtue, Deeds of Cruelty', Square Enix detailed the 5.1 patch in recent livestream from the Tokyo Game Show. There will be more main scenario quests, continuing the excellent Shadowbringers storyline, tweaks to crafting and gathering, major changes to PvP and a Nier Automata raid created by Yosuke Saito and Yoko Taro.

I've been itching for more Nier Automata since spending a holiday getting all of the phenomenal action game's many endings, and while I am not really a fan of big raids, I'll gladly make this sacrifice. The Copied Factory is just the first part of the Final Fantasy team's collaboration with Nier's creators, so expect another raid later.

While Shadowbringers blessed Final Fantasy 14 with some of its best quests, if you fancy going back in time and playing through stuff from earlier expansions, 5.1's New Game+ feature will let you do that. At launch you'll be able to play through Heavensward, Stormblood and Shadowbringers quests that you've already completed, though you won't get rewards and you'll have to start at the chapter's beginning.

If you're into your crafting, the update will offer you more diversions, a bit of streamlining and an improved UI. Blue Mages, meanwhile, are getting a new quest, a level cap increase to 60 and some new spells.

There's quite a bit more planned, including Pixie Beast Tribe quests, The Grand Cosmos dungeon and job updates. Keep an eye out for the patch notes before it arrives next month.