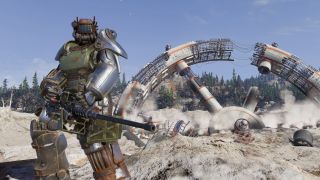 There's someone out there who loves Fallout 76 so much they've played it for more than 900 hours. The heart is a strange thing. Tragedy has unfortunately struck this unlikely relationship, as the survivor in question has also, over the course their long journey, amassed a ridiculous amount of ammo, so much that Bethesda apparently reckons it's an exploit and they've been indefinitely banned from digital West Virginia.

Reddit user Glorf12 claims that Bethesda banned them because it seemed so improbable that anyone would play for so long and gather so much ammo. They say that they simply really like the game, and that by using, but not exploiting, the bandolier perk, which reduces ammo weight by 90 percent, they've been able to lug around a great deal.

A screenshot of an alleged email from Bethesda customer service details the ban. It notes that Glorf12 had collected over 100,000 rare items within 30 days, accusing them of using an exploit. They had 140,960 ultracite ammo on one character, and even more on a secondary account.

They've apparently been banned until the "issue is fixed in a future patch", but a patch has come and gone and Glorf12 is still hasn't been able to set foot in the game. They say that, since they're unable to play the game, they can't verify the ammo numbers, but that they haven't collected as much as Bethesda claims.

"I have never had such a ridiculous amount of ammo," reads the Reddit post. "What I have done, however, is trade ammo back and forth between my main and secondary account as I try to decide on what guns I aim to focus on. Given the sheer amount of time I have spent playing I have legitimately collected ludicrous amounts of ammo."

A Bethesda community manager responded on Reddit, saying they'd investigate the support ticket. We've also reached out to Bethesda to find out if it's possible to collect this much ammo, and why it was flagged as an exploit.