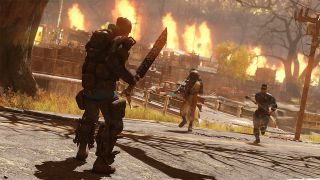 There are some significant changes coming to post-apocalyptic West Virginia, with the Fallout 76 Wastelanders update promising all sorts of things that will make it more like a Fallout RPG. In addition to the big update, however, the team's also working on some quality of life improvements and new features requested by players.

Bethesda recently gave a status update on the new stuff it's been working on beyond Wastelanders, most of which you'll see appearing next year.

Perk loadouts are coming in early 2020, along with a public test server, hopefully leading to smoother updates in the future. The legendary system, initially planned for this year, has also been pushed back to 2020.

Bethesda's also "looking into" PC text chat, an omission that still seems wild in an online multiplayer romp. The option to rejoin a server when kicked or dropped might also appear in the future, but there's no timeline for it.

Wastelanders is where all the flashy stuff is happening, though. A new story quest, companions, branching dialogue, opposing factions—pretty much all the stuff you wish it had last year. We're still waiting on a release date, but it's expected out this year.

Keep an eye out for more details on the quality of life improvements closer to their launch.