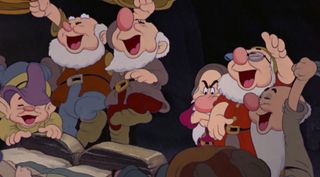 Sinister plots have come to Dwarf Fortress. Somewhere out in its ASCII world there are now bad guys who can send undercover dwarves to steal the artifacts from your fortress, and you can go Dwarf Cop on them. It's one of the most exciting components of the new "villains" release, which also includes some of the largest additions to Dwarf Fortress's Adventure mode in years. The most relevant thing about this update for most people, though, is that it's the last one before the developers focus on integrating graphics and launching Dwarf Fortress on Steam.

We wrote up this most recent update when it landed, and developer Tarn Adams has now put out the first of likely a few bugfixing patches. These typically follow big Dwarf Fortress releases, as there are always unexpected problems in its sprawling simulation. This update doesn't actually contain all the villainy features Adams originally planned, which will come after launching on Steam and Itch.io. But what's in there already sounds fun in a very Dwarf Fortressy way:

"In the test heist, the visiting infiltrator that flipped the dwarf traitor gave up their master, who was a war buddy that turned them using a shared belief in Omrak (whomever that is!), and it was all displayed in the report. So even with the feature delays, there should be the occasional wholesome set of details in fort-mode play. Amusingly, instead of mentioning Omrak, a bug at first gave the report as the top villain having "played for sympathy using a shared belief in an unidentified creature", since the deity Omrak did not have an official file over at dwarf counterintel HQ."

The big question now is how long it will take to rebuild Dwarf Fortress as a graphical game with a friendlier interface. Adams hasn't set a date, but once villain bugs are fixed, they'll "be pivoting entirely to Premium DF graphical work." While there's likely months of programming work ahead, on the bright side, a good chunk of the art is already complete and ready to be implemented.

One of the artists working on the tilsesets for the new release wrote on Reddit that "We have finished most of what we can; for any further development we need test-versions with the new features." There's a lengthy thread on the Dwarf Fortress forums for the graphics pack, which you can check out here. Here are some sprites the artists have posted in the last few months.

Adams posts updates at least once a month on the Dwarf Fortress website and forums, and also posts news to the Steam page. I expect those updates will soon apply to progress on the graphical version of Dwarf Fortress. Fingers crossed we'll be playing it before 2021.