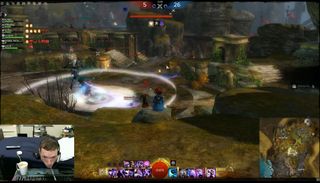 You might've noticed the surging viewer count for Twitch's Guild Wars 2 section lately. Did someone finally cave and conduct a naked-only powerleveling run? Nope, all eyes are on Keith "Aieron" Knight, a disabled gamer streaming his victories and defeats in Guild Wars 2's PVP battlegrounds with his Mesmer, Elementalist, Guardian, and Thief using cheek-controlled mouse movements and a pen in his mouth. Now that's awesome.

Knight, who was born with Amyoplasia Arthrogryposis (a joint-affecting muscular disorder), says he streams Tuesday through Friday from 9pm to 12pm PDT. He's also collecting donations for the Walk for Muscular Dystrophy charity which jumped nearly 20 percent since streaming began earlier today.