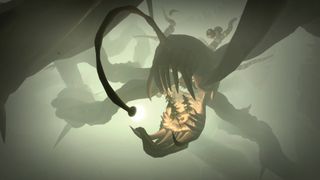 This preview was originally published in PC Gamer 327 in January 2019. Like cool magazines sent to your door with exclusive new features every month, designed beautifully by our talented art editor? Consider subscribing.

You’re a Hearthian, a curious, four-eyed amphibious being from a small planet in a weird solar system full of mystery. Not so much a civilisation as a single village, the Hearthians inhabit a crater on their planet’s surface, using wooden walkways and shacks to build up and around the limited space. They also build rockets. And you’re their latest astronaut.

My first experience of Outer Wilds was with the free alpha build that would go on to win the Seumas McNally Grand Prize at the 2015 IGF Awards. While the final version boasts a new art style and other improvements, the core idea is still the same. You travel this strange solar system, exploring its idiosyncratic planets and uncovering its many secrets. And then you die, and do it all over again.

And so you set off to unravel various mysteries, again and again. As you explore, your ship’s log updates with your progress—the things you’ve found and the rumours you’ve discovered. Once you leave your village, it’s up to you where you go and what you do, but, by talking to the villagers, you’ll get a sense of what might be worth your time. Equip your signalscope, for instance, and you’ll pick up the instruments of other travellers—Hearthians who set off to explore before you, most of whom are content to sit on distant planets, playing a jaunty tune.

One might mention an odd signal, which you can follow—perhaps with help from your camera probe—to find somewhere new. Breadcrumbs lead to breadcrumbs which lead to revelations. When you wake up for the next loop, the information is all catalogued, letting you pick up where you left off. Perhaps if you pick at the right thread for long enough, you’ll find a way to end the loop entirely.

The reset isn’t just an arbitrary gimmick. Many of the planets change or deform over time. Brittle Hollow is being slowly destroyed by the meteors that erupt from the active volcanoes of its moon. Exploration is dangerous early on, and then impossible as the planet breaks apart over the course of the loop. The Twins, meanwhile, are two planets joined by a flowing column of sand. As time progresses and the sand pours across, the caverns of Ember Twin are buried, while the mysteries of Ash Twin start to emerge.

The rumours are just hints at what you may find. Often, I’d find myself ignoring a trail of clues in order to go explore another phenomenon—partly to uncover new leads, but mostly because it looked interesting. This isn’t some vast, procedurally generated universe. The handful of handcrafted planets ensure that wherever you land, you’re sure to find something, even if it’s just a weird rock.

Four years after first playing Outer Wilds, I’m still intrigued by it. Not just for its mysteries, but for its folksy charm—the way the Hearthians look more like park rangers than scientists, or the soundtrack and the way it mixes sci-fi synths with an acoustic guitar hook that feels more at home by the campfire. I look forward to uncovering its mysteries. Mostly, though, I’m excited to spend more time on these quirky, endearing worlds.