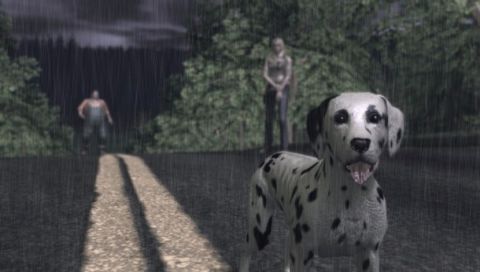 Enjoyable writing cloaked in layers of problematic navigation, tonal inconsistency and pressing A and D not to die.

Listen up, fans of intriguing storytelling, because I have a great game for you. Oh hang on, I should have been more specific. I'm looking for fans of intriguing storytelling who also enjoy cars that drive like shopping trolleys with a stick jammed in one wheel, intermittent game crashing, an excess of QTEs and some frankly tedious game mechanics.

This is Deadly Premonition: The Director's Cut – a PC port of the cult console game. You play as Special Agent Francis York Morgan who arrives in Greenvale – a oncethriving lumber town – with the task of solving the murder of a young girl.

At the beginning the Twin Peaks references threaten to overwhelm the game. It feels like pastiche gone wrong: you laugh at things you aren't meant to while character dialogue frequently misses the mark or comes across as cringingly self-conscious.

But the game soon finds its own personality – part survival horror, part horror comedy. Not the easiest of bedfellows as genres go, and so it tends to alternate between the two.

The main plot fuses laughs with multiple homicide well. But peppered through this are survival horror sections that take a repetitive selection of enemies and make you kill them in the same boring way over and over again.

Additional run-ins with the mysterious Raincoat Killer (who kills people not raincoats) make use of some mindnumbing QTEs, and one stage of a final boss sequence I played was dogged by clipping issues. This meant that in addition to the QTE buttons I was repeatedly hitting Esc to rescue my character from inside the scenery.

Deadly Premonition oscillates wildly between brilliant, tedious, frustrating and broken. Oscillating wildly also applies to the music, which often ends up inappropriate to the scene. You'll go from a menacing and tense theme to a jaunty tune that wouldn't be out of place in Animal Crossing, or sometimes the sound will intensify despite nothing happening on screen to justify the shift.

The game is at its best when you're interacting with its oddball cast of characters, whether completing the various side missions or following the story sections of the main quest.

It's at its weakest when you're moving from A to B – navigating Greenvale is not an enjoyable experience. Driving the car quickly becomes dull, scenes where you have to follow another character can be wilfully convoluted, and escaping danger revolves around QTEs.

Technical issues (it crashed numerous times, virtually all while driving) combine with the game's quirks and flaws and make it awkward to recommend. Tonally and in terms of quality Deadly Premonition is all over the place, but there's also an intriguing story and some great writing. If none of the shortcomings mentioned here are dealbreakers, you might well fall in love with it.

Enjoyable writing cloaked in layers of problematic navigation, tonal inconsistency and pressing A and D not to die.