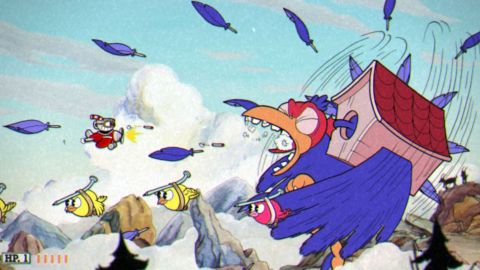 Not just for the masochists, Cuphead is a demanding but supremely rewarding modern 2D shooter that looks and sounds fantastic.

The post-battle results screen might say C-, but the feeling when you finally beat a stage in Cuphead is A+. Not so much a boss rush as a boss crawl, Studio MDHR’s outstanding debut pits you against some of the toughest enemies you’ll face in a videogame, and the process of beating them can be slow and sometimes painful. But when you eventually do, the surge of euphoria is undeniable. Its difficulty hasn’t been understated, then, but crucially, it’s hardly ever the game’s fault if you get hit. You’ll shout and swear plenty, but you’ll know it’s really yourself you’re annoyed with.

Within seconds of a battle kicking off, you often find yourself fending off threats on multiple fronts, simultaneously tracking Cuphead’s position but also keeping an eye on something hovering ominously above, another threat incoming on ground level, and another projectile or five floating somewhere in between. With just three hit points, you’ve precious little margin for error; as such, once you’ve begun to acclimatise to a particular attack pattern, you’ll find yourself restarting if you take damage during that phase. That’s the first sign that Cuphead’s got its hooks into you. And then suddenly you’ll deliver the killing blow and the wave of relief and satisfaction is overwhelming. The clock will say it took you two or three minutes, but such is the relentless, exhausting intensity of these fights that each attempt feels five times as long.

That feeling might not be worth persevering for if the controls weren’t immaculate. Equipped with a reliable jump and dash, Cuphead is nimble and responsive, his handling so expertly calibrated than an analogue stick—hardly ideal, you’d think, in a game designed for digital precision—never feels like a handicap. A parry move that lets you slap back any pink projectiles by hitting jump again in mid-air can occasionally seem a little fussy in its timing. Still, it’s used intelligently, letting you build your special meter—which can be spent in increments or saved for a huge blowout—and also doubling as a method of traversal.

These are simple ingredients, but Studio MDHR builds a series of thrillingly diverse encounters around them. Bosses don’t just limit themselves to a host of different attack patterns, but adopt several distinct forms. Some play out like pursuits, while others are confined to a single, claustrophobic space. In one stage you’ll use the parry to nudge a handcar forward or back as you race alongside a train; in another you’ll slap springboards to clear a tall enemy. Meanwhile, random elements keep things fresh, meaning you can’t simply learn patterns by rote and rely entirely on muscle memory.

I’m skimping on specifics, but that’s because a huge part of Cuphead’s appeal is seeing what bizarre monstrosity awaits you next. Not that you’ll have much time to marvel at the astonishing hand-drawn animation, because you’ll be so laser-focused on surviving as soon as the announcer’s dispensed with the formalities. It’s only after the fact that you can really appreciate the ingenuity of the animation and design of these encounters. And it’s not just a pretty face either, with a big band soundtrack that comes close to matching the visuals, one highlight of which is an uptempo jazz number that briefly segues into Ride of the Valkyries.

Cuphead’s bosses can be tackled on two difficulty settings: Simple (which is a barefaced lie) and Regular (hard). Beat them on Simple and you’re allowed to progress, but doing so locks out the finale, meaning you’ll miss out on a not-insubstantial chunk of the game. It’s only so useful learning the ropes this way, since many bosses use different attack patterns on Regular, or adopt a new form you won’t see at all on Simple. In other words, to see everything, you’re going to have to do it the hard way.

Difficulty is subjective, of course, but while there’s no doubt some idiots out there who will claim Cuphead is too easy, most will find it a tough nut to crack. Whether it’s fair is a more important consideration. And the answer is: mostly. On occasion it isn’t, and it’s often those variables that spoil things, with platforms and enemies positioned in such a way that you take an unavoidable hit through no real fault of your own. Such incidents are relatively rare, but in a game as demanding as this, it’s frustrating that you do sometimes need a hint of luck to get by. In a game that earns your trust by establishing its rules and staying true to them, there are a few moments where it doesn’t quite hold up its end of the bargain.

Still, 95 percent firm-but-fair to five percent bullshit is a more than acceptable ratio for what has clearly been a labour of love. There’s not a whiff of cynicism about Cuphead: from its aesthetic to its systems, it’s wilfully off-trend, and utterly its own thing. As tough as it gets, ultimately that’s what’s really worth shouting about.

Not just for the masochists, Cuphead is a demanding but supremely rewarding modern 2D shooter that looks and sounds fantastic.