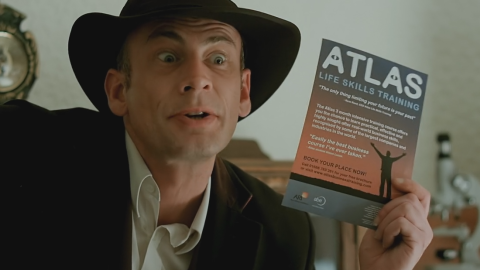 A decent murder mystery game that suffers heavily from poor controls and menus.

A young woman has been found drowned in a lake, but is it murder? Well, yeah. It wouldn't be much of a murder mystery game if it wasn't, right? Contradiction, a full-motion video adventure, has a fun concept, some rewarding sleuthing and snooping, and the video is slick and professionally shot, but problems range from the confusing navigation to the awful menus to a common blight of detective games everywhere: figuring out something long before your detective does.

In Contradiction, you're a police detective named Jenks, who for some reason only has from 5pm until midnight to catch the killer. Most of the game takes place while interviewing the tiny collection of ridiculously suspicious characters who live in Edenton Village, where the death took place. You can ask suspects about items you've collected or facts you've uncovered, and summaries of their statements are recorded in your journal. The goals is to find two statements that contradict each other and match them together. For example, if a suspect states he only met the victim a couple months ago, but later states he knew her in college, you can confront him with this inconsistency.

This is a neat idea that rewards careful attention and scrutiny, and leads to some fun 'A-ha!' moments. It mostly works well, like an adventure game where the objects you combine in your inventory are lies instead of found objects. You can also snoop around the town, though if there's something to be found at a particular location, a giant magnifying lens icon appears and a simple button press means Jenks finds the hidden item automatically. This isn't much fun, and as irritating as pixel hunting can be in other games, it tends to feel more like you're finding something yourself. Another drawback, but one found in a lot of detective games: I spotted a clue in the first hour that Jenks didn't alight on until near the end of the game, meaning I couldn't grill suspects about it until he let me.

These aren't the real problems with Contradiction, however. The controls, navigation, and menus are. Locations are often shown from the perspective of the direction you 'entered' them, in an effort to make players feel like they're walking around the town, but this actually makes it harder to keep your bearings. Walking East might mean tapping the right arrow, but continuing East might mean then tapping the up arrow or down arrow. I can't count how many times I accidentally backtracked or walked into a location without meaning to.

You can also travel by moving an icon around on a map, which is much easier, but you have to constantly open and close the map to do so and the icon won't let you move to every location, just the main ones. As you advance the case, locations you've visited earlier need to be revisited: for example, a clearing in the woods that was previously empty might now contain a new person to interact with. The result is that after every breakthrough, you need to awkwardly navigate back through every single location on the map to see if there's anything new. Poor navigation, and the requirement to continually revisit locations, quickly add up to a sizable headache.

The menu is perhaps the worst I've ever seen in a game, with absolutely no logic behind the choices of what key does what, presenting you with such gems as 'Esc to Load' and 'Enter to Exit', and a keymapping menu that requires you to cycle through every single control before you can quit it. Sometimes you can use your mouse to click an option, sometimes you can't, which further demonstrates that PC controls weren't an afterthought but a neverthought. Apart from an ambient volume control and a 'video vibrancy' slider, there are no real settings to speak of. Contradiction also doesn't autosave, as I found when another program crashed my PC and I lost over an hour of progress.

This is all a massive shame, because there's a lot I liked about Contradiction. The acting is enjoyably cheesy—the blatantly shifty-eyed suspects might as well be holding up a "I'm hiding something!" sign. Best of all is the delightfully overly-expressive Jenks, who gleefully acts as if every single question he asks is the key that will bust the case wide open. "Ever seen... this before?" he crows triumphantly, eyebrows waggling, no matter what object he's holding up, be it something legitimately intriguing like a piece of jewelry found at the crime scene or something utterly commonplace like a flyer for a business seminar. The contradiction system is generally rewarding, and the story, while not incredibly engrossing, kept me interested in progressing despite my growing desire to murder the menu.

A decent murder mystery game that suffers heavily from poor controls and menus.