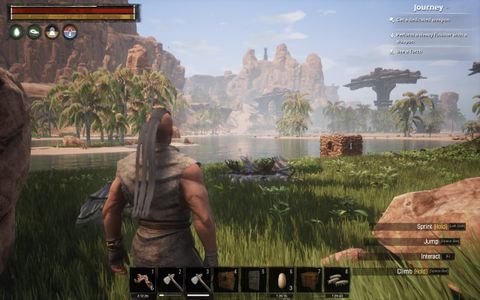 Broad in shoulder, wide in scope, rough around the edges. Nevertheless, an enjoyably meaty survival game.

What is it? A survival game baring flesh and hiding a fantasy RPG past its grind.
Expect to pay £34/$40
Developer Funcom
Publisher In-house
Reviewed on i5 6500, GTX 1070
Multiplayer Up to 40 players
Link Official site

We’re all grown-ups here, and this isn’t the first survival game to render both male and female genitalia with surprising detail (thanks for that, Rust). It is, however, as far as I know, the only survival sim in which you tweak the size your character’s personal areas while they hang nailed to a cross, their breasts or scrotum flapping this way and that in the breeze as if being teased by a vacuum cleaner. Half-Life had the train. Oblivion had the sewer exit. Conan Exiles has this.

Like the aforementioned Rust, this is a game about starting out naked and shivering and surviving in a hostile world by manipulating its resources until you live in relative comfort. Unlike most in the survival space, it’s also a game with an enormous fantasy RPG lying beyond the first dozen or so hours spent fashioning sticks and stones into prehistoric tools. An RPG of silly boss fights and quests for ancient artifacts, and one true to Robert E. Howard’s 1930s pulp fiction adventures, the cult 1982 Schwarzenegger movie, and the 2004 Conan tabletop RPG.

By rights the Conan licence ought to give Funcom’s survival game the kind of world-building that the genre generally struggles with, and it’s true to the extent that you feel a greater sense of place and character from the setting and mechanics than you might in, say, Ark. Keen to flex that tabletop muscle too, status effects such as crippling and bleeding colour the combat, often a little too much, while the world map is pure early 20th century exotica, recreating the collective imagination of a time before planet Earth shrunk to a knowable dot.

That world map, a huge swathe of the mythical prehistoric Hyborian age from Howard’s books, is Conan Exiles’ strongest asset, even surpassing the genital physics. It’s the dangling carrot (the world map, I mean) that keeps you mining rock after rock for ironstone, because you want the iron armour to explore the Unnamed City and vanquish its clicking skeletal horrors.

Even late in the game when tending to the hunger and thirst bars are a formality, there are still far-flung map regions hosting weather phenomena and enemies you’ve yet to see. Journeying beyond the deserts of the default spawn region and into meadows and snowdrifts with their own native clans and beasties is its own sense of accomplishment, crafting tree be damned.

About that, actually: Conan Exiles has a hell of a crafting tree. You could be forgiven for thinking you’ve accidentally loaded up The Sims and its every expansion, such is its devotion to interior decor items and unique armour sets later in the game. It takes an incredible grind to get to those upper echelons, inevitably, but the transitions between discernible phases are snappy enough. You can work your way up from wood tools through stone to iron and steel in one determined evening, as long as the server isn’t heavily populated or full of dicks.

Which, of course, it will be. For those entirely averse to human contact, it almost functions as a solo survival RPG thanks to a series of boss fights that lend a sense of structure, but it makes for a particularly opaque and lonely one in the absence of formal quests and a scarcity of NPCs.

As is so often the case, the apex of Conan Exiles is found on a private server with a few particularly devoted friends who won’t destroy your every accomplishment. In public server land, offline raids are generally forbidden so you can (usually) disconnect with the knowledge that your joke of a wooden hut will still stand when you return, but I encountered several servers where the dominant clan was so big that it could operate how it pleased with impunity—it’s join or survive out there. I’ve also seen solo players grind away until they could summon an avatar, however, a god made flesh in XL scale, and run amok across a large clan’s base. Conan Exiles is good like that.

What it isn’t very good at is coming across like a finished product. Despite 15 months gestating in Early Access, there are rough edges all over Conan Exiles, including audio sync issues, enemy AI that sometimes flatly ignores players, woolly melee fights and incredibly suspect slope traversal. Fighting anybody on a 10% gradient or above, for example, involves a lot of floating and swinging impotently at the air under an enemy’s feet.

Given that combat animations and weapon feedback aren’t where you’d hope them to be even when Exiles is functioning more or less correctly, it doesn’t work up much goodwill to look past the glitches when they happen. Nor are these shortcoming enough to write the game off entirely: its capacity to throw impressive new areas of the map at you while maintaining epic clan war sagas is something to be celebrated.

Broad in shoulder, wide in scope, rough around the edges. Nevertheless, an enjoyably meaty survival game.