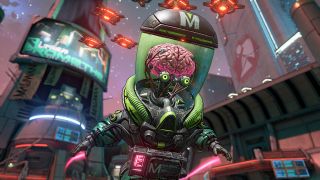 Borderlands 3 is a game of two basic elements: You've got your shooting, and you've got your looting. Beginning tomorrow, you'll see a dramatic improvement in the loot you get from the guys you shoot thanks to the Farming Frenzy "mini-event" that's set to run until January 30.

During the event, rare enemies are guaranteed to appear, and specific Legendary gear will drop at a higher rate than normal when you take them down. That includes repeatable bosses from the story campaign, Proving Grounds and Circle of Slaughter arenas, plus named enemies including Rare Spawns, Hammerlock Hunts, and Targets of Opportunity.

The Takedown at the Maliwan Blacksite raid event that was recently pushed back will begin at the same time, and run for the same duration. It's a little bit different from the Farming Frenzy event: Rewards will remain the same, but the difficulty will scale to match the size of the party (it normally defaults to four-player difficulty), so smaller squads or even solo players will be able to take it on.

The Borderlands 3 Farming Frenzy mini-event will begin at 9 am Pacific this Thursday  (that's 5 pm UK time), and run until 8:59 pm Pacific on January 30. Details are up at borderlands.com.