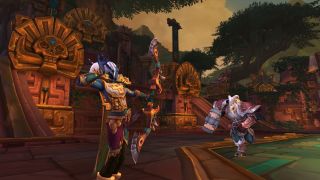 Blizzard recently announced its plans for World of Warcraft esports in 2019. There’s still some competitive spirit left in Azeroth, apparently, even after countless invasions, time travel shenanigans and, most recently, the return to the Horde-Alliance conflict. This year will see the return of the Arena World Championship with a larger prize pool, while the Mythic Dungeon Invitational has dropped the ‘invitational’ part and is now open to everyone.

The Arena World Championship—check out the plan below—will pit the best arena players against each other after a year of fighting. The North American and European regions will have two seasons each, and six cups, each with a $10,000 prize pool, every season. The top four point earners from each season will then duke it out for a $100,000 prize pool.

The Asia-Pacific, China and Latin America regions will also host cups, and at the end of the year winners and top point earners will face each other in the finals of the World Championship.

If PvE is more your thing, the Mythic Dungeon International replaces the invitational, allowing everyone with a Battle.net account in good standing to put together a team of five and show their stuff in the Proving Grounds. Get through five level 14 (the level could change) Mythic dungeons between February 26 and March 12 and you’ll unlock the Tournament Realm. There, you’ll be able to make a max-level character, pick their gear and talents and then compete in time trials. If you make it to the best eight groups in the region—everyone’s split into either East or West—you’ll have to avoid getting knocked out in a double bracket elimination. An end of season LAN with a $100,000 will determine the ultimate victor.

To fund the prize pools, Blizzard will be selling new in-game toys this spring, with a portion of the sales will going towards both both events. The toys haven’t been revealed yet, but expect more details soon.