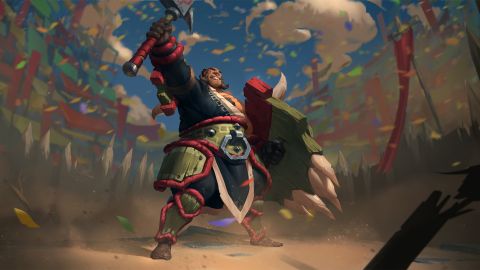 Battlerite gathers up the best parts of MOBA, free-to-play and competitive game design and frames them in the most flattering light it can muster. This game of close-fought, tightly-crafted arena combat isn’t just one of the best team action games released this year: it is a goodwill ambassador for a corner of PC gaming that doesn’t always make the best first impression.

This spiritual successor to Stunlock’s Bloodline Champions has the top-down perspective and hotbar action of a MOBA, sans the experience and gold-farming strategic layer that makes games like Dota 2 and League of Legends so complex. If you’re among the comparatively small number of people who have invested serious time into MMO PvP—particularly World of Warcraft’s arena—then you’ll find familiar elements here. Again, however, Battlerite strips away chaff and adds depth.

This cast of warriors, mages and—er—time-bending goat-things has been designed for balance and competitive variety. Despite the prevalence of stuns, silences, zoning effects and ultimate powers, Battlerite draws many of its best ideas from the world of fighting games. You don’t have a mana bar: you generate energy through the use of powers, and this can be cashed in to trigger your best abilities or souped-up ‘EX’ versions of your regular powers. This is an elegant way to create a competitive environment where every player has loads of room to express their skill. The right EX ability, triggered at the right time, can have more impact than a hastily-triggered ult. There are moments of fighting game style drama in the micro-pauses between plays, the kind of intricate competitive minutiae that should make the hairs on the back of your neck stand up if you’ve ever cared about getting good at a game.

Battlerite’s principle mode, two-on-two or three-on-three elimination, is designed to allow this intricate combat system to shine. Two teams fight over a small arena with a wide-open area in the centre. Die and you’re booted back to the benches: teams score a point by wiping out their opponent, and matches are typically played first-to-three. To encourage strategic play, an orb periodically spawns in the centre of the map that grants bonus health and energy to the team that takes it down: an effective condensation of the Baron or Roshan mechanic from League of Legends or Dota 2 that encourages a rapid-fire sequence of strategic plays, feints, counter-attacks and gambits.

Freya: A frontline warrior who manipulates electricity to counter attacks, pull and repel opponents, grant herself shields, and deal bonus damage: as long as you know what you're doing with her EX powers.

Ashka: A tiny fireman (but not that kind of fireman) who relies on carefully-aimed stuns and dashes to stay alive while dealing loads of damage from range. Vulnerable up close, if you can catch him.

Pearl: A caster with a spammable heal and the ability to create enemy-repelling bubbles of water. She's durable, but it takes skill to deal effective damage with her slow-charging ranged attack.

When the match timer expires, a PUBG-style ‘Death Zone’ begins to contract around the edges of the map, eventually funnelling the survivors into that narrow zone in the centre. Fighting one-on-two at the end of a long series, employing every trick and combo you’ve learned to cling on to a hope of victory is genuinely exhilarating—and this is the kind of experience that Battlerite succeeds in repeating regularly across a day of play, with multiple full matches fitting into the span of a typical MOBA round.

If you’re the sort to get frustrated or upset by a loss, Battlerite isn’t going to fix that—its skill ceiling is pretty high, and you’re going to have to wade into the wilds of online matchmaking if you want to get better. However there is a decent tutorial, a practice mode, and co-op bot matches to help you develop your confidence. Battlerite also mutes all of your matchmade partners by default, turning typically-toxic chat into something that you have to opt in to, rather than out of. This is a smart bandaid on a problem that no game this competitive has yet successfully solved, and don’t worry: Battlerite’s combat is fast and reactive enough that you don’t really need to chat with your teammates to do well.

This is also an example of free-to-play done right. There are loot boxes, but they’re of the benign cosmetic sort and you’ll unlock plenty of them for free through regular play. Crucially, Stunlock also offers the option to pay a one-off fee to unlock all current and future characters. This recontextualises free-to-play as a kind of demo version, ensuring that the matchmaking queues always have people in them but allowing you to opt out of the microtransaction economy for less than the cost of a full-price game.

Battlerite is an impressive, complete-feeling experience that deftly dodges the problems that trail after its genre and its business model. It’s an indie game wading into territory that has proved perilous to bigger budget endeavours and making a success of it. Most importantly, though, it’s a game that gets to the heart of why it’s fun to team up with your friends and make tiny wizards fight one another.