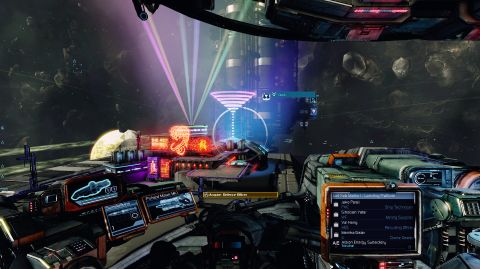 X misses the spot. The occasional bit of spectacle cant save this boring, broken and charmless space simulation.

When I was first set loose in X: Rebirth's vast universe, I was convinced it was going to be amazing. That '34' on Metacritic couldn't possibly be accurate. I'm in space! In a spaceship! But I quickly realised that this is, in fact, a colossal missed opportunity. A supernova of bugs and baffling game design that refuses to let you have any fun, no matter how hard you try – and I really tried.

First problem: you only get to pilot one ship, the horribly named Albion Skunk. You're able to explore it using a first-person mode, which could have been fun if there were more than two rooms to it, and if anything was even slightly interactive.

You have a separate ship for trading that follows you around and has to be given orders. You can't cancel an order without editing your save file, and sometimes it just refuses to move. It's like I'm dragging a badly-behaved toddler around a shopping centre. Then there's your co-pilot, Yisha. For a character you spend the entire game with, and who's almost constantly talking, you'd think they would have hired someone with some basic acting ability to speak her lines. But while you'll eventually grow used to her awkward delivery, you'll never stop cursing how useless she is. Case in point: if you're piloting a drone, and enemies start attacking the Skunk, she'll just sit there dumbly. Couldn't you, like, move, or fight back, or something?

The game has a problem with humans generally. On stations – which all look identical, incidentally – you'll talk to NPCs, who are terrifying, slot-mouthed, dead-eyed shop mannequins. While space itself feels nicely alive, teeming with traffic and huge ships lumbering back and forth, the interiors feel eerily lifeless. In a nightclub I hear the ambient sound of people drinking and laughing, but it's empty except for two people standing motionless by the bar. Not exactly Deep Space Nine.

Rebirth fares much better when you're in space. Some messy shadows aside, it's a good-looking game, with colourful nebulas, asteroids, planets and stars providing a vivid cosmic backdrop. The combat is like jousting in space. Ships make passes at each other, firing a volley of shots when they get close and hoping some connect. Or you can use heatseeking missiles. Hit the spacebar and you can strafe, FPS-style. Hit it again to steer with the mouse. The movement feels nicely weighty.

The biggest problem is that there's nothing fun to do. There are countless stations, jobs, contracts and ways to make money, but it's all deeply tedious, and utterly free of personality. The characters you talk to cycle through the same few dumb lines. The missions are rote. It's only in the (dreadful) story that you'll find any excitement: its large-scale space battles are at least genuinely impressive to behold.

Think about how rich and full of character the Mass Effect universe is. Now imagine the exact opposite and you have X: Rebirth's charmless world. I just don't want to be here.

Some severe patching is needed. There are more bugs and broken missions than I have space to list here, and save-file editing is almost always the go-to solution, which is just absurd when you realise they're charging £40 for the pleasure. It feels like an early access game. But even if they iron out the flaws, X: Rebirth is just so innately unlikable, and so deathly boring, that I think it may be beyond help.

X misses the spot. The occasional bit of spectacle cant save this boring, broken and charmless space simulation.