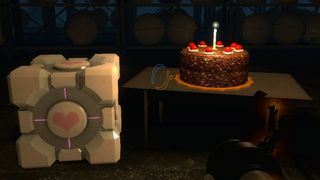 Find all previous editions of the PCG Q&A here. Some highlights:
- Has Half-Life: Alyx made you want to buy a VR headset?
- What's a game that handles politics well?
- Has a game ever made you rethink your moral code?

During the credits for The Great Muppet Caper, Fozzie says, "Nobody reads those names anyway, do they?" To which Kermit the Frog, ever the voice of reason, replies: "Sure. They all have families."

When a videogame's credits roll it's very tempting to give in to our inner Fozzie, press Escape, and jump back to the menu or post-game open world collectathon stage. But sometimes a game makes it worth your time to watch those end credits, maybe with an in-character song (like Portal or Arkham City), a bonus level minigame (like Flower), or an epic rock-out (like Warcraft 3: The Frozen Throne)

Our latest weekend question is: What game's end credits are worth watching? Here are some of our answers, let us know yours in the comments.

How can you not love that song that plays at the end of Mass Effect? "And I need you to recover / 'cuz I can't make it on my own..." I don't think there's any other lyrical music on Jack Wall's synthy score, which really made this endcap rock song from Faunts stand out. You've just finished one of the most cinematic games of recent history in 2007, and BioWare closes it out with an appropriately movie-like touch, a song that manages to capture the spirit of the game and invite reflection as the names scroll.

The band hails from the same city that BioWare does: Edmonton. I have to imagine that folks from the studio had seen them play live and brought them into the game.

Red Dead Redemption 2's credits are long. Looooong. Because roughly a million people worked on the game. But there's a whole bunch of story wrap-up during it, little scenes that fill in the gaps between the two games (RDR2 being a prequel) letting you find out what happens to several of the characters we've come to know and setting the stage for the events of Red Dead Redemption. Plus, the music is good. It might seem hard to sit there watching 30 minutes of credits, but you've sat there playing the game for lord knows how many hours already. Stick around.

I make a point of watching the credits for any game I finish but Journey's are a specific treat. If you've played, you know that the orchestral score by Austin Wintory is about half the experience of the entire game. Journey's credits are set to one last track while your character, having climbed to the top of the shining mountain, travels back to the beginning of the game by soaring over every previous area as a shooting star. This is also where the game will tell you the names of any co-op companions you met along the way in Journey's super light-touch multiplayer system. If you had an anonymous friend join you on your Journey and seeing their name at the end of the credits doesn't pluck your heart strings you are a tougher fiddle than me. Playing through Journey felt to me like one giant emotional breath in. The credits sequence is a chance to breathe back out again, like a cooldown after a workout, so I didn't just emotionally combust on the spot.

"Still Alive", the song played during at the end of Mirror's Edge, is still one of the greatest songs made for a video game. The song softly kicks up in the background as Faith reunites with her sister and pans up to a title card right as the chorus punches. The song then plays as it transitions to credits. It gave me the same chills in 2008 that I felt as I rewatched it today. As the music fades away, you can also hear news reports in the background that reveal more about the aftermath of Faith's story. As I watched it today, I remembered how original Mirror's Edge was. It's a type of game that I didn't know I wanted so badly. This was the same golden era for EA that produced Skate, Burnout Paradise, and Dead Space. For a while, the company put big money behind offbeat ideas. It's incredible that a first-person parkour game with minimal combat made by the Battlefield studio ever got made (along with an eventual sequel). Good times.

Easy answer: Bastion. Wait, maybe Pyre. No, definitely Bastion. Or... Transistor? Don't make me choose. Basically, music is the reason to stick around through the credits for me, and every single one of Supergiant's games ends with a powerful emotional punch and a fantastic song. Bastion's finale is the one I remember best because I've listened to the soundtrack a hundred times, and it really is hard to top Setting Sail, Coming Home. But Transistor's Paper Boats and Pyre's Bound Together are also wonderful. Look at the Youtube comments on any of them and you'll see more than a few comments about crying during the end credits. Not many games can make that claim.

Good credit rolls are all about the music, and Max Payne 2's closing track is one of the best. The game ends on a somber yet hopeful note—"I had a dream of my wife. She was dead, but it was alright"—and then slowly turns over into the pensive guitar-and-drums styling of Sam Lake's favourite garage band, Poets of the Fall. The song, A Late Goodbye, is a break from the rest of the soundtrack (which is excellent, by the way) and really draws a line under Remedy's cinematic ambitions: Like Evan said about Mass Effect's credits track, it's the kind of closer you'd expect to hear at the end of a movie, which is what makes it such a perfect way to wrap up the game.

Shout-out to Saints Row 4 and the cartoons during its credits that let you see what the Saints get up to next, but I'm gonna go with Privateer. Once you've finished the story you can keep playing, but if you go back to Admiral Terrell after he's given you the "thanks for saving the galaxy" speech he'll begin reciting the credits, complete with interruptions from the protagonist, as if this is just another conversation. Meanwhile the soundtrack just goes nuts.

Jarred Walton: None of them

I don't typically pay attention to game credits, not unless I know there's something in there for me. If it's good music, or some clever and funny tidying up of the story, that works—I got a kick out of Portal and it's sequel back in the day. But I can't recall the last game where I stuck around in any meaningful way. That's partly because my pile of shame continues to grow and the number of games I actually finish shrinks every year. All I know for sure is that if you want me to see who worked on a game, long scrolling lists of names isn't going to do it for me. Maybe there's an opportunity here for a credits mini-game?