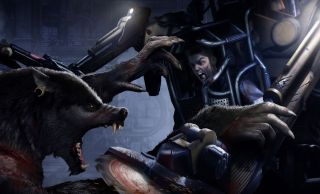 Werewolf: The Apocalypse—Earthblood is all about rage. Protagonist Cahal is, as you may have guessed, a lycan and can shapeshift from human to wolf to werewolf with the press of a button. During a hands-off demo of the action RPG at E3, I watched as Cyanide Studios game director Julien Desourteaux slunk around an arid Nevada compound midway through the game, swapping forms and taking a quiet approach on his way in. You can scout areas and go through crawlspaces in wolf form, and as a human you can use a crossbow to silently eliminate guards from the high ground. But taking the less confrontational route has a cost.

"Stealth is a resource," Desourteaux said. You're constantly fighting your rage, indicated by a slowly-filling circular meter in the lower right of the HUD. Avoid picking up pills, or stray too closely to corrupted objects on the map and Cahal loses his inner battle and you'll go into beast mode. Literally.

Cahal turned into a hulking werewolf, ripping enemies to shreds with a flurry of melee attacks. It's hard to tell how how the combat feels without sitting at the keyboard, but from the looks of it, there's a decent amount of variety to moves and combos. Eventually Desourteaux went head-to-head with a human in a quasi power-loader exoskeleton. After that? He tore through another captain type character, a member of the werewolf faction that, unlike Cahal, is no longer worried about keeping their baser instincts in check. Clear the area of enemies and you'll return to human form.

There's an awful lot of lore to digest from White Wolf's World of Darkness pen-and-paper RPG universe, but if you haven't kept up with the source material here's the basic gist: Werewolves are eco warriors fighting to protect Gaia and reclaim the natural world from evil corporations. So, you'll be doing things like taking out fracking sites and destroying power generators disrupting the natural world and its fauna.

Those power generators at the Nevada facility, for instance, passively affect Cahal's rage level by giving him tinnitus. What might be mildly annoying to you and me is amplified exponentially given Cahal's superhuman hearing. Spend too much time nearby without destroying them and you'll lose your cool. No more stealth—it's business time. And if you need help figuring out exactly where these objects are, you can activate a sort of heat vision that lights them up in red on the screen.

Rage is something that you have to keep an eye on outside of combat scenarios, too. This wasn't part of the demo, but Desourteaux said that during dialog scenes you'll have to contend with your aggression. If you make the wrong conversational choices, your rage meter will fill. You can either punch the person you're talking to in the kisser to relieve the tension and end the conversation, or, let the rage build and watch what happens next.

"Sometimes you don't care and you want to rip off his face," Desourteaux said.

There will also be sections of the game where the developers hamstring you, taking away key powers—filling your IRL rage meter—only to give them back shortly thereafter so you can obliterate a room full of enemies. And of course, it being an RPG, there are attacks to level up and new powers to acquire along the way. Desourteaux's favorites weren't on display in the demo, but they sound just as cathartic as those that were. One will freeze time, locking enemies in place, giving you the opportunity to shred them apart as you wish. Another acts like a vortex and sucks adversaries toward you so you can go into a Wolverine-like berserker attack. Brutal.

Earthblood isn't exclusively aggro, though. The demo's second section took place in a hub area near the game's opening, set in a peaceful forest outside of Seattle. Here, wild animals like deer roam about freely and it's where you'll plan your next moves with your pack. After making his way down craggy paths and through the glade, Desourteaux came upon a precipice overlooking a chasm, and beyond that bulldozers, other construction equipment, and a dam.

"We want you to see the beautiful nature," Desourteaux said. "Then you go to Nevada and it's all about nature suffering." To his left, a bear (massive compared to Cahal's human form) overlooked the destruction beyond, while a wolf slept lazily off to the right. Unfortunately you won't be able to pet any of the animals, even as a human. Instead, Cyanide's goal is to allow you to let you talk to the animals' spirit forms. And seemingly in a nod to Legend of Zelda: Ocarina of Time, you can even talk to and walk inside a towering tree. It'll give you new missions, and serve as a space to unlock new skills and upgrade existing ones.

Given that the game shares a universe with Vampire: The Masquerade—Bloodlines, you might expect some crossover characters and Easter eggs for fans. If they exist, Cyanide is keeping coy.

Even in this early state, the game looked great stretched across a huge 4K display. The demo was a pre-alpha build and had a few rough edges, like a camera that misbehaved during close-up attacks in combat, and animations that aren't quite final, but it was running at a locked 62 FPS according to Desourteaux, via a GeForce RTX 2080Ti. With that card, Desourteaux said the game can run with an unlocked framerate in the 100s, but will dip into the 70s, hence locking it for the demo.

What I'm most intrigued by is the way Cyanide is balancing the internal push-pull struggle between giving into bloodlust and keeping your rage in check. Especially since it extends well beyond combat scenarios and seems to be the game's defining gimmick. That it's apparently not a shallow morality system where you're arbitrarily choosing between being the good guy and the bad leaves a lot of room for you to fill in the gray areas as you see fit.

I always loved hitting the Renegade interrupt during dialog scenes in the Mass Effect series and seeing what would happen. Sometimes it was throwing someone through a plate glass window. Others it was committing cold-blooded murder with a bullet to the head. Knowing that I can act out however I want in Earthblood and rip someone's face off once a conversation goes south has me giddy.