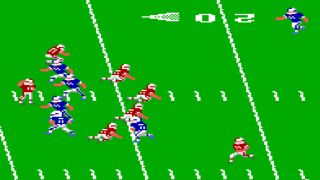 There's no greater pastime than trying to predict how something will end before it even begins. For months there was speculation that Thanos would be defeated when Ant-Man jumped up his butt and grew to full size. For years people tried to predict who would wind up ruling Westeros in Game of Thrones (with the answer being the dullest character imaginable). And every year we try to figure out who will win the Super Bowl before the first ball is snapped.

Who will win Super Bowl LIV? Computer simulations are a great way to find out, capable of crunching vast amounts of data and virtually running through the game before it's played by actual flesh-and-blood millionaires. Last year, using highly advanced football simulator Super Slam Dunk Touchdown, our computer simulation correctly predicted the Patriots winning over the Rams, though our score (44-11) wasn't quite a match with the real score (13-3) and Tom Brady didn't actually dunk a bowling ball through a basketball hoop amid piles of banana peels. A few small details aside, the simulation worked perfectly!

This year for our computer simulation of the Super Bowl, we're leaving banana peels and bowling balls behind and turning to a more accurate simulator: 4th & Inches, a 1987 DOS game made by Accolade.

As with Super Slam Dunk Touchdown, I'm unable to completely simulate the game with a 100 percent hands-off approach. I do have to play one side, in this case, the Kansas City Chiefs, or as 4th & Inches calls them, the Champs. (The All-Pros, in blue, will represent the San Francisco 49ers.)

However, I am simulating the Chiefs' playcalls from the coach on the sidelines by using a random number generator on my phone to pick a number from 1-5. This will decide which plays are called, the style of defense, the length of passes (short, medium, long), the choice of receivers, and whether or not to punt on 4th down. Just like how Chiefs head coach Andy Reid does it, I assume.

I'd also like to note that the rosters of 4th & Inches have way better player names than reality does. Names like Mack Truck, Ox Smersh, Harry Lipz, Woodie Blitz, Rilly Quick, Flash Darling, and Slim Dixon will all be taking the field. I mean, these names are great. And all the puns! Jerry Attrick! Willie Pass! Tank Salott!

Here are our ironclad predictions for Super Bowl LIV, based on a random number generator calling the plays and me doing a fairly poor job running them using the arrows on my keyboard and the Insert key, which are the only controls.

- Impatient to get started, the players take the field and begin playing before the National Anthem has actually finished.

- The Chiefs QB is sacked three times on their first possession, then opts for a medium pass on 4th and 20, from their own 18 yard line. He is then sacked for the 4th consecutive time.

- The 49ers kick a field goal, then moments later score a safety when the Chiefs QB is tackled by a player named Tackle in his own end zone.

- The Chiefs complete their first pass of the game, for a gain of one yard.

- On 4th and 5 the Chiefs elect to pass (successfully!) and gain a first down, their first in the game.

- The 49ers go for a field goal at the end of the half with 2 seconds left, but miss.

- Finally, there's an actual touchdown! The 49ers complete a pass from the 25 yard line.

- The words "Quick tackled by Muffins" appear on the screen.

- The Chiefs make the first interception of the game.

- The 49ers complete the longest pass of the game for 27 yards. It's only the second pass they've thrown in the half.

- They sling another long pass, 18 yards, to Muffins for their second touchdown, a minute later. That Muffins is on fire.

If our advanced computer simulation is correct, and I have no reason to doubt that it isn't: