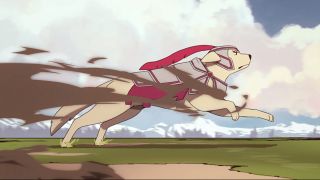 Wargroove should be quite a bit more welcoming when an update hits the cheery but tough turn-based romp today. It's not easy to save the kingdom of Cherrystone, but difficulty presets and a new, flexible checkpoint system should make the journey a bit less perilous if you choose.

The default difficulty has been giving people problems, and changing the sliders to give you even a tiny bit more damage or income knocks the game into 'easier mode', immediately limiting you to a maximum of one star per mission. It's a tad harsh. The update, thankfully, introduces a bunch of presets and reduces penalties.

Wargroove's default difficulty is Hard and the only way to achieve S-ranks (aside from making it even harder, if you're bold), Medium is a bit easier and lets you get three-star ranks, Easy knocks it down to two, and Story is the easiest of them all, limiting you to one star.

The checkpoint system essentially gives you a single battle save. Instead of having to start all over again because you messed up—maybe you lost a unit you were ordered to protect—you can set a checkpoint anywhere. You only get one in every battle, but it can be overwritten.

There are plenty of other changes, too, including a CPU player option in multiplayer, shared vision among allies, better unit information and S-rank requirements clearly displayed. The game's pace, which can be rather slow, has also been cranked up a bit. A movement speed option will allow you make battles brisk, and skipping animations should be faster.

Wargroove's update will be live from 1 pm GMT/8 am EST today.