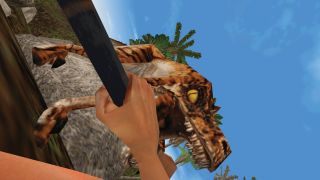 Billed as a digital sequel to The Lost World, Steven Spielberg’s second Jurassic Park movie, Trespasser was both groundbreaking and a complete disaster. The large jungle environments, procedural dinosaur animation and real-time physics were impressive for the time, resulting in a lot of breathless previews and overblown prerelease buzz. But when it was finally released after a year-long delay, it was a mess of half-baked ideas, it barely ran on even the most powerful PCs, and it featured a peculiar arm-based control system that was so hilariously clumsy it came to define the game.

Trespasser is set on Isla Sorna, where John Hammond’s dinosaurs were created in a secret laboratory before being shipped over to Jurassic Park on nearby Isla Nublar. Following the events of The Lost World, the island has become a prehistoric nature reserve, and is completely overrun with dinosaurs—from giant, peaceful herbivores to aggressive carnivores with a taste for human flesh. And your plane has crashed there, leaving you stranded, alone, and at the very bottom of the food chain.

You play as Anne (voiced by Minnie Driver), a woman cursed with an unusually long, bendy arm. It’s with this unwieldy physics-enabled appendage that you do pretty much everything in Trespasser, whether it’s firing a gun or stacking boxes to hop over a fence. You reach out with the left mouse button, move your arm with the mouse, and grab stuff with the right button. But it’s so unpredictable, twitchy and difficult to control that you spend most of the game dropping things and flailing around hopelessly.

To really show off that physics system, Isla Sorna is scattered with thousands of crates. There are, in fact, more crates per square inch than dinosaurs, and you’ll often find yourself having to make rickety staircases out of them to get past obstacles. Which would be fine if it wasn’t for that idiotic arm knocking them over. But it’s worth noting that Trespasser was released six years before Half-Life 2 wowed us all with its crate-stacking physics puzzles. So while DreamWorks didn’t quite nail it, it was something of a pioneer.

The arm is so ungainly that it’s actually comical, although it can be hard to see the funny side when a Velociraptor is charging at you and you accidentally throw your gun stupidly to one side instead of shooting it. And because everything Anne does is governed by this silly, floppy tentacle she calls an arm, the whole game suffers. I appreciate the developer trying something different, especially in the late ’90s when most first-person games stuck to a pretty narrow template, but the execution is laughably bad.

Before release, DreamWorks talked up its dinosaur AI, saying the creatures would behave intelligently according to their mood and interact with one another. But there was a problem with the code, the solution to which was permanently setting them to angry. This reduces them to little more than generic, aggressive FPS enemies, making combat scenes boring as well as clumsy. Although, admittedly, encountering a Tyrannosaurus for the first time is a nerve-wracking moment. Before you see it you can hear its footsteps pounding loudly in the distance, which is a nice bit of sound design.

One thing you can’t fault Trespasser for is feeling like a legitimate part of the Jurassic Park franchise. Richard Attenborough reprises his role as Hammond, and you hear excerpts from his journal as you play, giving you an insight into the character far beyond what is revealed in the films. They’re brilliantly written and Attenborough plays it perfectly, with a touch of melancholy befitting a man whose dreams are crumbling around him. Hammond is one of the most interesting characters in the series, and Trespasser offers a rare opportunity to learn more about him and his past.

“You could imagine a lesser actor doing a cardboard mad scientist performance, but Richard Attenborough created this soulful, slightly sad, incredibly human individual,” said Trespasser writer/ designer Austin Grossman in a 2014 interview with fansite TresCom. “But the truly stunning thing was how attentive and respectful he was to us, a bunch of random game developers. Here was this legendary actor going carefully and thoughtfully through every line of our script, treating us like colleagues. It was an unforgettable lesson in decency and professionalism.”

In the final level it’s possible to walk across an invisible platform and hear Attenborough give a stirring rendition of Shelley’s famous Ozymandias sonnet, which fits his character perfectly. “It was the end of the day and we had a little time left over,” said Grossman, recalling the day it was recorded. “It was an extra, but I definitely wanted to use it somewhere. Marvel used it in Avengers #57 and I never forgot how well it worked.”

Driver does a decent job too, despite the fact that Anne is a fairly nondescript character and pretty much a blank canvas. In fact, the most interesting thing about her is her, uh, unusual health meter. Swing the camera down and you’ll see a tattoo on her cleavage of a heart that, when you take damage, fills in with red ink. And when the tattoo is complete, you die. It’s preposterous and almost certainly aimed at sniggering adolescent boys, but it is kinda imaginative. I also like how Anne tells you how many bullets you have when you fire a gun, rather than having a counter on the screen.

This streamlining of the interface is reflected in other parts of the game, which is surprisingly understated for a Hollywood movie spin-off. Even though this is partly down to content being cut over the course of its troubled development, it was also a key part of Trespasser’s design philosophy. “We knew we wanted to strip things down and do a solo story,” said Grossman. “No human NPCs, no conversation interfaces to stop the action or take us out of the world. The same way System Shock was designed, which I also worked on. The abandoned island was the compelling thing for us, a modern ruin that tells the story of the people who built it.”

Isla Sorna itself hasn’t aged terribly well, but I was surprised to discover that, with the help of a fan patch downloaded from trescom.org, I was able to run the game on Windows 10 at 4K/60fps with no problems. A very different experience from people who played it back in 1998, whose framerate would slow to a crawl if there was more than one dinosaur on screen. The high resolution does make a technique the developer used to create those dense jungles obvious, though. Trees and objects in the distance are flat, pixelated sprites, only becoming 3D when you get close. This would’ve been easier to hide on a CRT at 800x600, but in 4K it’s quite jarring.

Trespasser is far from a good game, but it’s an interesting one. In some respects it’s a faithful and worthwhile extension of the Jurassic Park universe, adding further depth to the character of John Hammond and filling in some previously unseen backstory. But in almost every other sense it’s a baffling, frustrating experience, rendered hilarious by the absurd, gangly arm of its protagonist. The designers at DreamWorks Interactive (now rebranded as DICE Los Angeles) might have bitten off more than they could chew, but the result is a fascinating curio of a game that, for all its deep-running problems, is an experience like no other on PC.