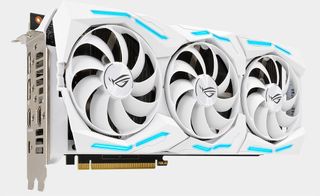 I've thought about building an all-white PC on a few occasions, then I remember how bad I am about cleaning my desktop on a regular basis, and I decide against it. Still, temptation looms, as it does now in the wake of Asus announcing its ROG Strix GeForce RTX 2080 Super White Edition.

No matter what the color of the cooling shroud, the 2080 Super is one of the best graphics cards for playing games at a 1440p and 4K resolutions, at a fairly reasonable price (read: under a grand). It's the second fastest consumer GeForce card, it supports real-time ray tracing, and is not going to feel slow for a long while (though you may have buyer's remorse once Ampere cards rolls into view).

The white edition model Asus is pitching runs at a 1,650MHz base clock and 1,860MHz boost clock in its default Gaming mode. There's also an OC mode that cranks the boost clock to 1,890MHz. Both boost clocks represent an overclock over Nvidia's reference 1,815MHz clock.

So it's basically an overclocked 2080 Super with a white shroud and RGB lighting. Beyond that, Asus touts the use of premium power components, a precision machined plate that makes "2x more contact with the GPU," and a three-fan cooling solution with axial-tech fans.

Asus tells me this is one of several white-themed products it plans on releasing this year. The company showed off some of its upcoming products at CES, including a cooler, case, motherboard, and headphones. Just be sure to stock up on dust filters for your chassis if going the all-white route for your next build.

It's not clear when the white edition RTX 2080 Super will be available or how much it will cost. As a point of reference, the non-white model sells for $789.99 on Newegg.