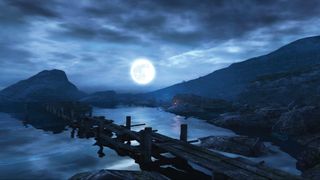 With the commercial release of Dear Esther in 2012, The Chinese Room had no idea that their interactive ghost story would cause quite the cultural shift in the video game world. Originally developed as a Half-Life 2 mod, Dear Esther was an experiment of sorts, created by Dr. Dan Pinchbeck at the University of Portsmouth. In his project, Dr. Pinchback would explore the nature of narrative in videogames by stripping back traditional game mechanics to a bare minimum. His results created something that was completely original to games and started a discussion that got right to the heart of videogames.

Dear Esther has no NPCs, challenges, collectibles, combat, and no fail state. You wander around an ambient island and a narrator guides your journey, a man reading aloud a number of letters he has written to his dead wife. It's eerie, solemn and quietly poetic and a first in a long line of games to test the interaction and relationship between player, story, and environment.

Looking back at the quotes from Pinchbeck about Dear Esther being made for academic reasons, its pretty weird, especially now that his project, made over a decade ago, has influenced how exploration and environments are now used in video game storytelling. From its lack of traditional game mechanics, and deciding to prioritise the player's interaction with its story and environment, Dear Esther spurred on an important discussion: do you play Dear Esther? And, speaking of playing, what exactly makes a video game a video game in the first place?

With Dear Esther beginning to break the mold, 2013 was the year where this discussion really started to kick-off with Proteus releasing in January followed by Gone Home later in the year. Proteus was created by Ed Key and David Kanaga and had even less traditional game elements than Dear Esther. In Proteus, you walk around an island as day turns to night and seasons pass you by, it's a relaxing game where players have a wander and just submit themselves to the game's peaceful ambiance. Proteus' minimalism focused more on the player’s experience of the game is through interpretation, imagination and their own discovery rather than being a piece of entertainment with a story and characters.

In Fullbright's Gone Home, you play as a young woman named Katie who returns to her family home to find it completely empty. As you start to explore the house, picking up objects and reading bits of paper here and there, you begin to learn about the drama surrounding the family and their subsequent disappearing act. Learning about the family through their personal living space was a deeply intimate way to tell its compelling story.

But these unique play styles and storytelling was not celebrated by all and so anti-game, nongame, and walking simulator were also used as descriptions, the idea that Dear Esther, Proteus, and Gone Home had little to no gameplay and thus, not a game.

Although there was criticism, slow-exploration and environmental storytelling started to root its way into game design, in the years following Gone Home there has been a burst of narrative first-person atmospheric art exploration games from a bunch of different genres.

Released commercially in 2013, The Stanley Parable lets players explore a drab empty office building and lets the player make narrative decisions through walking to certain routes, choosing to take the omnipresent narrator's advice or to go against it with comedic consequences. The Layers of Fear series took note from the spooky house vibes of Gone Home and built a horror game about a tortured artist who is losing his mind, trapped in his mansion.

Firewatch, The Vanishing of Ethan Carter, Virginia, and What Remains of Edith Finch all create compelling stories through their exploration mechanics, with both The Chinese Room and Fullbright developed on their storytelling style releasing Everybody's Gone to the Rapture and Tacoma.

The play style of exploration games has even influenced big-budget games like Uncharted 4: A Thief's End where developer Naughty Dog told Polygon in 2016 took inspiration from Gone Home and Everybody's Gone to the Rapture saying that they like people being able to "walk around, look at things, just take in their environment ー without being shot at." Even this year we've seen elements of walking sims make it into blockbuster games with the term being thrown around once or twice when describing Death Stranding.

Walking sims, exploration games, interactive narratives ー whatever you want to call them ー have challenged the way in how videogames are played, experienced and defined. The term walking simulator is now an indication of a game that encompasses diverse, compelling narratives through great writing and engaging exploration. Walking simulators were, and still are, criticized for their mechanics, but over the decade that attitude began to shift from what they don't have to what they do differently.