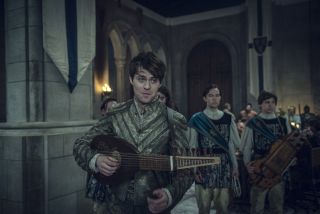 Possibly the biggest pop-culture touchstone to emerge from The Witcher on Netflix isn't a battle or a bathtub, but a ballad. Toss a Coin to Your Witcher has inspired memes, at least one mod, and some remarkable covers across a broad range of styles. The creators of that song (and all the others in the show), Giona Ostinelli and Sonya Belousova, recently told GamesRadar that they also put together a number of different styles of the song for possible inclusion in the show—including a rap version.

"For every song we wrote for Jaskier we had about five or six versions, because all these songs were written before the show even entered production," Belousova said. "We wanted to make sure when we were presenting songs to Lauren we were presenting her a whole spectrum of different styles and genres. We tried to go from something very medieval and renaissance to something very contemporary."

Even though the rap version of the song didn't make it into the show, Jaskier's performance feels very contemporary—unexpectedly so in a show that's ostensibly a swords-and-sorcery fantasy tale. But that's apparently intentional too: Belousova equated Jaskier to the Freddie Mercury of the Witcher world, and the music is intended to represent his growth from a simple singer to a full-blown rock star.

"That's why when we just meet his character and he sings the song 'You Think You're Safe,' it's a very simple song—just voice and lute—and the reason for that is we wanted to create this musical evolution of his character," she said. "So when he sings 'Toss a Coin To Your Witcher,' musically you can see that journey that he goes through from the tavern to becoming the rockstar of the continent."

Ostinelli and Belousova's rap rendition of Toss a Coin to Your Witcher remains unreleased, although she said they might put it out "as a bonus track" someday. In the meantime, this remix from Mega Ran is quite good if you're in the mood for something like that. Personally, I can't get enough of this: