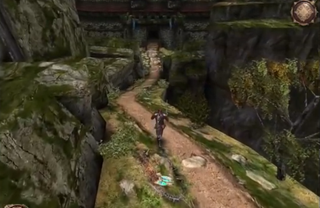 CD Projekt RED has firmly cemented The Witcher as one of the biggest and most technically ambitious RPG names in the industry, but it could have been entirely different. According to the video above, hosted by former Witcher project lead Ryszard Chojnowski, the adaptation was originally an isometric action RPG in the vein of Diablo and directly inspired by Baldur's Gate: Dark Alliance. It's a long way away from the sprawling open world CD Projekt RED released last week.

Built using the same engine as the poorly received WW1 shooter Mortyr, the 2002 demo was created as a pitch to potential publishers. As you'll see above, the main protagonist is not Geralt but instead a fully customisable character, though Geralt would make an appearance as an NPC. Meanwhile, only one Witcher sign was implemented in the demo in the form of Igni (ie, a fire attack).

While ostensibly an RPG, the build demonstrated did not have any progression systems, though a rudimentary conversation system had been implemented. While the demo footage shows a game in its early stages, it's clearly the result of a team conflicted on the question of what the game would actually be.

"There was no communication between the story writers and the team, and everyone had their own vision of the game," Chojnowski says. "The programmer wanted it to be a short and simple action title, whereas me, and the art team, and the writers, yearned for a fully fledged RPG to give justice to the novels we all loved."

"Even though the art team was extremely talented, we realised that the engine shortcomings and the lack of direction and supervision was really holding the project back. So in may 2003 the board of directors made the decision to abandon the project."