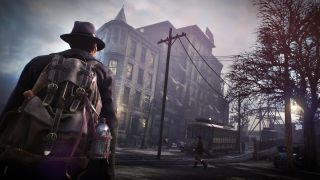 The sinister pull of anything and everything Lovecraftian means fans have to put up with a lot: Terrible film adaptations, a bit of historical racism, and in more recent years, games desperate to bottle a bit of the dark ichor for themselves. The Sinking City is the latest, an open-world, action detective game where PI Charles W. Reed tries to discover the origins of flooded city Oakmont's ruin, and perhaps his own encroaching madness.

The studio behind it is Frogwares, best known for the Sherlock Holmes adaptations, and to some extent this is just that same investigative gameplay—rifling through newspapers, reconstructing events, chatting to unfriendly locals—in a rubbery Halloween mask. It's a great-looking mask, though.

Sinking City prides itself on not bossing you about too much, dropping you off in Oakmont and leaving it up to you to talk to the inhabitants, pick up cases and figure out what's going on among the rotting fish parts and soggy streets. Of course upon arrival you find that the only way out of the port is closed, and you're only going to get through if you find out where the offspring of a local dignitary has disappeared to. Funny that.

And so we're off, conducting an investigation that will feel incredibly familiar to anyone who played Sherlock Holmes: The Devil’s Daughter or Crimes and Punishments. Chatting with Oakmont residents will open up new dialogue options, and heading to new locations will let you hunt for clues. All that information goes into the Mind Palace in one of your menus, where you can match up information to build a bigger picture of what happened.

You can also go into a reconstruction mode where you have to put past events—represented as sort of ghostly vapor people—into the right order. Less excitingly you can also head to the local newspaper to get a look at the archives, using dates and details to dig out a much-needed address or name. The address is worth scribbling down on some real paper. You have a map, but there are none of those helpful automatic markers standard in open world games. Apparently to get a real PI experience you have to hate convenience in all its forms.

What did take me by surprise—dock three points from my Lovecrafty fan account—was that Sinking City actually let me have a little adventure on the ocean floor. My search for a missing man led me to follow in the footsteps of a marine expedition. I found myself underwater in ye old bulky diving equipment, following the dull glow of ye olde lamps. (Everything in this city is olde).

It was a novelty and hinted at darker, deeper mysteries to be delved later on in the story. It's impossible not to compare Sinking City with Call of Cthulhu, which was a more linear, slightly more B-movie adventure. While they share a lot—a troubled PI, reconstruction sections, fish guts—Sinking City so far looks like a far more satisfying and lovingly designed bit of fan fiction.

Fishy but make it fashion

I only got to play through the first two missions, but it was enough to know that Sinking City had nailed the strange, alien aesthetic of Lovecraftian horror, even if it didn't feel like it was going to break any new adventure game ground. One of the first people you meet is a member of a powerful local family, and descended from a line of ape-human hybrids. Even if his demeanor and dialogue are your classic pompous arse, his character design is just simian enough to be unnerving.

That race is bested only in the beauty pageant by their rivals, the fish-human hybrids, who have these formless but unsettling features, huge flat eyes, and the melted look of a favorite monster toys left leaning up against a hot radiator.

The city of Oakmont itself is like a poor man's Venice, ruined buildings slumping into the water. Roads have given way to channels that have to be negotiated by boat, a mixture of your classic open world streets where buildings either scream "ignore me I'm just set dressing" or "I am very important narratively." I had a few random encounters with small, cannon fodder-style monsters in a ruined house, and a nice tension between running and using precious bullets—which are also the game's currency—to take them out.

I was itching to get out there and see just how many secrets and side missions there were to play with, because there's nothing worse than a pretty ghost town.

By the end of the demo I was ready to grow some gills and dive back in, ready to once again sigh and mentally repress knowledge of Lovecraft's problematic beliefs, and to help an NPC find their lost son/wedding ring/copy of the necronomicon. Sure, this steals a lot from Sherlock Holmes, but at least it does it well, and Arthur Conan Doyle and Lovecraft pair as well as a fine Sauvignon and Cthulhu calamari.