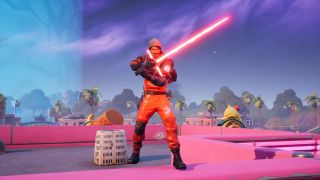 Over the weekend, a new clip from the upcoming Star Wars movie The Rise of Skywalker debuted in Fortnite. It wasn't just projected on a drive-in movie screen, though. There was an elaborate preamble in the form of a Millenium Falcon and TIE Fighter dogfight set against the looming silhouette of a Star Destroyer. The theatrics kicked off about 15 minutes later than the intended time because too many people wanted to see the clip (and get a free glider), enough to bust Epic's login services across Fortnite and the Epic Games Store.

The whole ordeal was a smiling nightmare, as if the entire decade of pop culture—memes and movies and viral dances—was chucked into a single swirling collage.

How it all went down

I try to catch the event myself, but I'm booted from a match, so I settle for an assortment of Twitch streamers instead. I watch a Batman scuttle by in one. A member of the New England Patriots enters the frame in another, materializing a chair beneath them (an emote). Rey bounces by on a pogo stick. A Stranger Things Demogorgon practices some building maneuvers.

All this before the Millenium Falcon zips around and pew-pews and lands at the center of the map. A holographic projection with the voice of Geoff Keighley, who I'd just watched host The Game Awards a few days earlier, appears in front of the ship. He's speaking to us live. There are requests to show excitement through emotes. Black Widow doing Orange Justice. A Hotdog flossing.

The ship opens and a Stormtrooper walks out. I recognize the voice as Ben Schwartz, the voice of BB-8 but also the voice of Sonic in the upcoming CG movie. I think of the redesigned movie Sonic which only makes me thing of the old, horrifying, human-teeth-having version of movie Sonic. This image joins the scene and stays, no matter how much I try to push it out of my mind. Sonic makes jokes, drums up more excitement, and announces the imminent arrival of J.J. Abrams.

And then J.J. emerges. Epic made a bespoke J.J. skin. There was a meeting in which an artist was tasked with transforming J.J Abrams into a shiny cartoon man. Someone sat at their desk and clicked around in a program, perhaps sipping coffee on occasion, maybe staying late to get the features just right. Maybe this person was asked what they did at work that day by a friend or family member, and that person answered, 'I made a spooky living doll that the creator of the hit television series Felicity will puppet. He is to deliver a message.'

The mannequin of the co-creator of Lost walks out of the Millenium Falcon at the center of Fortnite's cartoon island and takes his place next to Holo-Geoff and Sonic the Stormtrooper. J.J. does a spinning flip and introduces the clip. Sonic makes several jokes about J.J.'s tight pants.

The clip plays out in the air above the scene. It's a very short bit that says next to nothing about the film. There are familiar characters, images. Someone performs a Jedi mind trick. Everything you've seen in a Star Wars movie before, rearranged and presented without context. I'm excited to see this movie but the scene doesn't move the needle one way or the other.

I didn't think I'd feel so old this fast. I'm only 30, but media and marketing tactics have already transcended me. I'm the grumpy old man shaking his fist at the screen. What feels to me like an absurd collection of images and associations is a lot of kids' new normal, their default exposure to advertising.

I remember TV commercials between cartoons. Billboards. Ads, plain and clear. And then there was the onset of internet advertising sharpened by data collection schemes. But this? I'm not prepared. It doesn't compute—there are no lines anymore, just one big pop culture slurry.

Is it any worse than the marketing tactics I grew up with? I want to say yes, but it's too soon to see how everything will shake out over the next decade or so. Attention is the new currency. Removing friction and presenting it as generosity (a free-to-play game with the promise of a free glider in this instance), gussying it all up with theatrics and the intimacy of actual people speaking to me, the player, sure makes everything feel like more than a commercial. It was a one-time event, so it's something to remember, something to tell people you where there to witness. I have a feeling Fortnite won't be the only game to integrate advertising so completely into its update schedule, either.

Anyway, I'm looking forward to next year's one-time Shave the World event, brought to you by Schick razors. Attend and you get the Hydro Man skin, free!