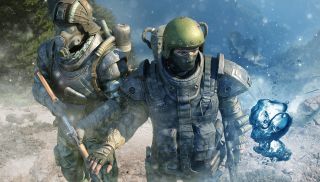 The STALKER-like free-to-play MMOFPS Survarium has been in development since mid-2012, following the dissolution of GSC Game World and resulting cancellation of STALKER 2. It doesn't offer quite the same experience as that of its cult-classic inspiration—but it's very similar in a number of significant ways, and it's being made (for real) by many former members of the original STALKER team. And now, finally, you can give it a shot without needing a closed beta invitation and the ability to speak Russian.

The announcement says the open beta is now available in Europe, but a Vostok Games rep confirmed that North American players can try their luck with it as well, although he warned that pings—the game's servers are all currently located in Russia and Europe—may not be consistently great. He also emphasized that while the beta includes only two PVP modes, Team Deathmatch and Battery Retrieval, development of other features, including the Freeplay mode, is ongoing.

"In Freeplay, the player appears on one of the starting positions on big location inhabited by mutants and possessed by anomalies. This mode gives the player complete freedom of action: He will decide who to assist and who to attack, whether to be a loner or join the group of other players to survive longer," he said. "The content of the map will be generated randomly and will depend on the actions of players, so each playthrough will be unique and unpredictable."

Interestingly, GSC revealed last month that it is back in business, although there's no word yet about whether STALKER 2 will be similarly resurrected.