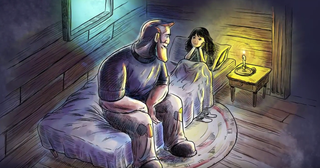 Insomniac Games (Spyro the Dragon, Ratchet and Clank) is on its way to the PC proper with the announcement of a new game, Song of the Deep (unless their Oculus game arrives first). It’s an underwater metroidvania—you explore an open, maze-like 2D environment in a shoddy submarine while shooting underwater monsters, upgrading abilities, and discovering secrets. I was able to play some of it at Insomniac last week, and while I don’t think Song of the Deep introduces any new puzzles or flourishes—nothing the genre hasn’t seen before—the (potentially) dynamic combat system, involved narrative, and detailed artistic direction are intriguing enough for me to pay attention in the long term.

You play as Merryn, a 12 year old girl who spends her days on the sea fishing with her father. One day, he doesn’t come home and Merryn sets out to find him. The setup is storybook simple, and that’s wholly intentional. The narrative plays out in short storyboard sequences, ripped straight from the pages of a picture book. And, in a strange twist, GameStop (yes, the US retailer) is publishing. In conjunction with the release of Song of the Deep, which will have a physical edition in its stores, Insomniac is putting out a book that ties into the game’s story. They’re intentional companion pieces, aimed for a younger audience that might identify more with Merryn’s struggle to find her father and overcome the ocean’s obstacles. I haven’t had eyes on the book, but the idea is pretty novel (ha ha) at least. My primary concern is that they’ll depend too heavily on one another, that the game’s narrative will expect the book to fill in the blanks. The small segment I played had a few gameplay voiceover sequences, but those were mostly about what Merryn was seeing in a given moment.

Merryn sets of in search of her father in a homemade submarine that, through some story events, gets imbued with magical energy called Tyne. Since Song of the Deep takes place underwater and no traditional platforming is required, the free-floating locomotion lends itself to a looser brand of puzzles than you might find in a gravity-bound metroidvania. Think Aquaria, instead. In one puzzle, I had to use my submarine’s claw to pull a lever which opened a gate across the screen. Beyond the gate was a headless statue. Before the gate descended, I had to throw the statue’s head onto the statue in order to complete a magic circuit. It was a relatively simple puzzle that tested my timing, accuracy, and a tiny fraction of logic. If the ideas stack without becoming convoluted, Song of the Deep has potential to be a great, albeit familiar puzzle game. Maybe too familiar.

In the latter half of the demo, I was given the ability to leave my sub and scuba dive as Merryn. Doing so made me more vulnerable, but also let me slip into smaller underwater tunnels to dig up secrets, most of which were an in-game currency that fed into ship and weapon upgrades. But the scuba diving segments quickly devolved into a series of well worn laser and mirror puzzles. In order to progress, I had to rotate mirrors, redirecting a series of colored lasers through and into one another. There might be a purple laser receptacle, but a blue and red laser shooting off in wild directions from the ceiling and floor. Rotate a few mirrors, combine the streams, and redirect them into the receptacle. Sure, these puzzles required some thought and tinkering, but I can no longer count all the mirrors I’ve rotated, the lasers I’ve redirected.

It’s a shame the puzzles are so tame, because the art is beautiful. Layers and layers of parallax ocean and Gaelic imagery tell their own story about a civilization long lost and nature’s slow reclamation. I really enjoyed puttering around the detailed environments like a fat trout in my little submarine, dancing around dangerous jellyfish, or shooting torpedoes at mutated sea urchins. The combat is where I hold most of my faith in Insomniac. Their games are characterized by bizarre, creative weaponry, and Song of the Deep seems to tap into that playbook so far. I could shoot a torpedo and then immediately catch it with my sub’s hook. The torpedo continued its thrust while grappled and circled around the sub indefinitely. It served as an impromptu forcefield, something to take a hit if a cloud of jellyfish or urchin spikes flew my way. How far that kind of creativity extends remains to be seen.

And it’s creativity that has me most worried about Song of the Deep. Insomniac, known for its character and independence, seems to be playing it safe with this one. The combat could be great (maybe), the story has potential to grow and resonate with a younger audience, and the art evokes a submerged Miyazaki from time to time. I’m just not sure it’s enough to save Song of the Deep from drowning in the familiarity of its tired progression and puzzle design. But until I see how it all evolves over the course of play, I’ll hold out hope.

Song of the Deep is due out later this year.