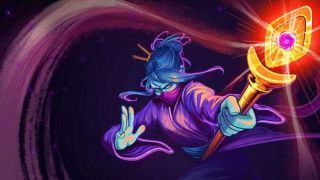 Slay the Spire's The Watcher is the game's fourth playable character, and she's finally here. This blind monk heads into battle wielding a staff, but much of her power comes from her ability to enter different stances, each of which drastically changes the way she plays.

Correct use of these stances holds the potential for incredible power, but also make  Slay the Spire's 4th character tough to master. Here’s how to get to grips with her, as well as a couple of deck ideas to get you going.

How to play The Watcher in Slay the Spire

The Watcher’s most important mechanic is her use of stances. There are three different stances which allow The Watcher to use other cards; Calm, Wrath, and Divinity. The Watcher cannot have No Stance.

The Watcher starts each encounter in No Stance, which has no effect on her other cards. The two most common stances are Calm, which grants 2 energy once you leave it, and Wrath, which causes The Watcher to both deal and receive double damage as long as she remains in it.

The final stance is Divinity. When The Watcher enters this stance, she gains 3 energy, and while in it, she deals triple damage, but will automatically leave Divinity at the end of her turn. This is the most powerful stance, but the most difficult to enter. While Calm and Wrath can be entered and exited by a number of cards, Divinity is only activated by gaining 10 Mantra, a resource only gathered by a small number of cards, or by playing the card Blasphemy, which kills The Watcher at the beginning of her next turn.

Timing is key when playing as Slay the Spire's Watcher. Many decks leverage her ability to retain cards until they can be used most effectively by swapping stances. The easiest way to do this is by using Wrath’s damage multiplier, but doing so makes it easy to open yourself up to unnecessary damage.

It’s a good idea to keep a card to hand that will let you enter Calm: not only will using that stance help avoid any extra punishment, it’ll provide extra energy ahead of your next move. Similarly you can use Divinity to empower your attacks more with less risk, but be careful not to overcommit.

Like the other three classes, The Watcher begins each run with a starting relic and a basic deck. She starts with four strikes and defends, and one card for entering Wrath and Calm—Eruption deals 9 damage and enters Wrath, while Vigilance grants 8 block and enters Calm. Your starting relic is Pure Water, which grants another card, Miracle. This, at the start of each combat encounter, costs nothing, but grants 1 bonus energy. Miracle is automatically retained at the end of each turn, but is exhausted on use.

This kind of build requires plenty of patience: it build up to an extremely powerful attack that aims to sweep your opponents aside in one. Naturally it relies heavily on Retain cards, but also on Establishment, a Power that reduces the cost of a card by 1 each time it’s retained.

Offensively Retain decks benefit most from Windmill Strike, which gains 4 damage every time it’s retained. If you can hold a sufficient amount for long enough, they’ll not only be free, but also capable of dealing huge damage, especially when you’re in Wrath. More importantly however, you’ll need cards that'll keep you alive long enough for this deck to ramp up in power. Perseverance and Protect are key to this, with the former's effectiveness over time being particularly helpful.

Retain also requires the ability to swap between stances quickly. While Eruption and Vigilance are helpful for this, Crescendo and Tranquility are useful alternatives. You’ll also want plenty of draw, for which Scrawl is likely to be a crucial card: it'll help fill your hand with important cards.

While Wrath and Calm are the most common stances, Divinity shouldn’t be overlooked. Like Wrath, it allows for increased damage output, but it’s less risky and provides bonus energy. Entering Divinity costs 10 Mantra, and the aim of this deck is to gain this resource as often as possible, to help you quickly enter Divinity without suffering the risk attached to Blasphemy.

Only four cards provide Mantra. Devotion is a Power card that gives you 2 every turn, which makes it an integral part of the deck and extremely useful if you’re able to upgrade it or play multiple copies of it. Prostrate only provides 2 Mantra, but costs nothing and also provides a small amount of Block. Pray provides 3, as well as Insight, a 0-cost card which lets you to draw extra cards. Worship is a little more expensive, but provides 5 Mantra. One more card, Brilliance, interacts with Mantra, dealing increased damage depending on the amount acquired during battle, which offers a potent offensive solution. Equally Damaru is a useful relic, as it provides 1 Mantra per turn.

None of these cards are particularly good on their own (with the possible exception of Brilliance), which makes Mantra decks something you’ll likely want to pivot to over time, rather than something to commit to at the start of a run. If you go with it, get a good amount of Block and Draw cards, but don’t forget that you’ll also need offensive cards to exploit Divinity’s damage buff. With any luck, you won’t need to rely on Wrath at all, so using Calm cards is a better early game strategy.

Whichever deck you choose, Slay the Spire's The Watcher benefits from a few key relics. Anything that provides extra energy, like Ice Cream, Happy Flower, or Gremlin Horn helps pull off those important offensive turns. If you’re using many cards at once, relics like Shuriken and Ornamental Fan shouldn’t be overlooked. Damage reduction or Block relics like Orichalcum and Fossilized Helix should help stall, especially if you’re going for longer-term strategies.