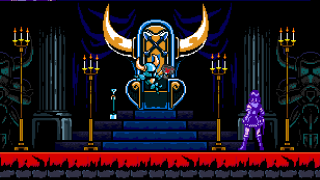 Shovel Knight has had so many cameos since his debut in 2014. According to his Wikia page, he has appeared in 30 different games in various forms like a chatty NPC in Yooka Laylee, a guest character in Indivisible, and was even honoured with the role of an assist trophy in Super Smash Bros. Ultimate.

One of Shovel Knight's most recent appearances is in the gothic metroidvania, Bloodstained: Ritual of the Night that released earlier this year. If you apply a piece of armour to your character, they transform into the blue knight who looks pretty buff in 3D.

But, Shovel Knight isn't done with Bloodtsained quite yet, the free fan-made game Shovel or Whip casts him back into the metroidvania's dark universe. But this time it is to the series' great NES ancestor, Castlevania. He's not alone though, Miriam, Bloodstained's main protagonist, is also there but she is less than happy to see him.

Shovel or Whip is a fan-made mini-game that consists of a single boss fight, you play as Miriam trying to defeat Shovel Knight who has made himself at home in the castle comfortably sitting on his throne. Although it's only one fight, Shovel or Whip is carefully crafted to keep true to the atmosphere and feel of the Castlevania games. Both Miriam's moveset is a direct callback. The way she slides across the floor, how her axes arc when she hurls them, and, obviously, she has Castlevania's iconic whip.

Shovel Knight has some pretty slick moves too, he can bounce around on his shovel to avoid your attacks, summon a giant golden gauntlet that slams into you, and uses his shovel to dig up parts of the castle floor to hit you. He's a tricky opponent but it's more fun then difficult to beat him, but there are two more difficult modes if you're up for a challenge. The game also offers controller support and re-bindable keys.

Shovel or Whip is a short, fun, and loving ode to Shovel Knight, Bloodstained, and the history of the Castlevania series, and the best thing is that it's totally free and available to download and play over on itch.io. For more excellent free games make sure you check out our list of the best free games on PC.