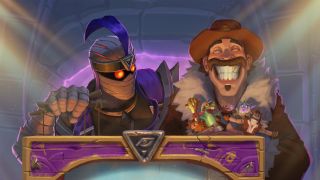 It looks like something new is happening at Blizzard, and it just might have to do with collectible cards. Late last week, Hearthstone principal game designer Mike Donais revealed during a Dog livestream (via Hearthpwn) that he's no longer working on Hearthstone.

"As of January, I don't work on HS," Donais said in the stream chat. "I am [still] at Blizzard, can't say what the game is."

Donais' departure came as something of a shock, given that he's been once of the most visible members of Team 5, particularly since Ben Brode dropped the mic in April 2018.

Senior designer Dean Ayala confirmed on Reddit that Donais is now working on something new. "He still gives us advice and just recently pitched us a robo-murloc design for Battlegrounds even though he had already moved on from the team. Thanks Mike, I know we can always count on you for murloc designs and murloc related puns," he wrote.

"Battlegrounds is now a responsibility of the card design team, so the same team that works on expansions will now also handle content production for that game mode."

Whatever Donais is up to now, he will be getting help from Peter Whalen, who tweeted about also moving on the following day.

I'm doing great. Still at Blizzard, but not on Hearthstone anymore. Making something cool with Mike but we're a long way off from talking about it in more detail.January 31, 2020

Both developers have extensive experience in card-based games—Whalen created the deck-building roguelike Dream Quest prior to joining Blizzard, while Donais has previously worked on Magic: The Gathering and the Duels of the Planewalkers adaptation—so it's not too hard to imagine that they're putting their heads together for some new digital deck-dealing, especially given that Hearthstone has been out for six years now. (Time flies, eh?)

The loss of two of its top developers might feel ominous for Hearthstone, but change happens and perhaps fans can expect a change of approach in the future. Hearthstone 2, maybe—or, perhaps, IIearthstone? No, probably not. But something is going on behind the scenes. We'll let you know when we find out more.