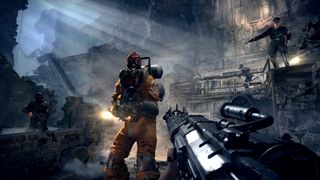 Last week, 20 minutes of Wolfenstein: The Old Blood footage emerged out of PAX East. Now, Bethesda has released their own high-quality recordings from the show – including yet another 20 minutes courtesy of the show's second day.

The new(er) footage starts out attempting a more stealth style. It doesn't last for long.

The Old Blood is a prequel to Wolfenstein: The New Order, set in 1946. Across the two-episode standalone expansion, BJ returns to castle Wolfenstein, and, by the looks of things, hits many people with a pipe. It's due out on May 5.

You can see the first day's footage below.