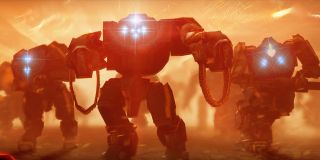 It's been a little more than a year since the sci-fi RTS Etherium was announced, and now it's finally time to see what it brings to the party. The game came out today accompanied by a bombastic new trailer, and developer Tindalos Interactive is holding a livestreamed Q&A this afternoon on Twitch.

Etherium features three factions battling for control of the indispensable resource that gives the game its name, each with its own unique units, characteristics, and abilities. The single-player Conquest mode unfolds across multiple planets with "radically different" environments and terrain, and there are three "secondary factions" as well—the Raiders, the Parasites, and the Guardians—who can be fought, or turned to the player's cause. There's also multiplayer support for up to four players, with battles to the death that place a premium on "high-speed strategy."

The big hook is the dynamic weather system that creates "climatic events," like surprise sandstorms or blizzards, that can dramatically impact the battlefield. "These weather events will differ greatly depending on the planet on which you are fighting," the Etherium website states. "Sandstorms on the desert planet, Serenade, the blizzards on Arctis, Pilo’s volcanic eruptions and numerous tornadoes, hurricanes and electromagnetic storms will make the conflict more challenging... for better or worse!"

It sounds satisfyingly old-school, and the launch trailer is cool too, but doesn't provide much of an idea about how the game is played, and there are currently no user reviews on Steam to go by. So if you try it, and you like it, let us know in the comments. (You can let us know if you didn't like it, too. Because democracy.)