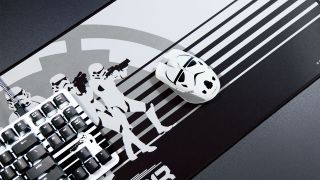 For the discerning Imperial office jockey who wants to make short work of clerical duties, payroll and video games, Razer’s new range of Star Wars gear is the perfect fit. Dave from Finance is a great example. His work space on the Death Star is built exclusively from black glass, wrought metal, and sadness, so this set offers a welcome pop of color via that crisp monochrome design. Some may say that the Stormtrooper prints make it tacky, but that person would be a Rebel and Traitor. Anyway, Dave’s happy. This makes it clear where his loyalties lie. It also reminds him of a happier time when his father worked on an Imperial recruitment station. Has anyone told you about the Stormtrooper pension plan? It’s simply to die for.

Similarly, the Imperial crest on his BlackWidow Lite’s escape key is a nice touch that sets this deck apart (Dave would have liked to see more references elsewhere, but it’s probably best not to look a Tauntaun in the mouth). What’s more, the gray rubber sidegrips of the wireless Atheris mouse give it an unexpected sense of class. Which is undermined by the cheap-looking Stormtrooper face printed across the top, admittedly, but Dave supposes that budget cuts are necessary if they also have to fund the stamping out of the Rebel Alliance. Interstellar death rays won’t pay for themselves, after all.

Luckily, the Goliathus mat isn’t subject to such limitations. A band of the Empire’s finest take pride of place in its centre, and they’re accompanied by a striking font that looks like it was cribbed from a propaganda poster. Happily, it’s also big enough to cover what Dave suspects may be bloodstains from the desk’s last occupant.

In terms of performance, the Goliathus results in smooth, accurate movement from the Atheris mouse with no resistance to speak of. Although the Atheris itself may be a little small for a Stormtrooper, it is tremendously responsive with 7200 DPI and boasts an impressive battery life of up to 300 hours (allegedly). Adaptive frequency technology means that other wireless devices (like passing Gonk droids or the Emperor’s Twitch streaming gear) won’t interfere with the mouse’s performance either.

The BlackWidow Lite may be the best of the bunch, though. Compact and subtler than its companion pieces, Dave appreciates such portability in spite of it lacking pass-through (although he does miss a ten-key numpad on the right-hand side). He’s also a fan of the Razer Orange Mechanical Switches included with this plank. Besides offering a satisfying bump to each keypress, their mild-but-still-notable ‘clack’ drowns out the sound of screaming from that torture chamber across the hall. Noise-dampening O rings are included should he wish to quieten things down for his colleagues, too; as Razer points out, this ensures that “the only thing you’ll be hearing is victory”. Oh, and Steve from reception having his toenails pulled out because he got Lord Vader’s coffee order wrong. He just wants a decaf soy latte with a shot of low-fat caramel, Steve. It’s not that hard to remember.

Finally, Dave was pleased that he didn’t have to pay much more than normal for these unique designs. The Atheris mouse is available for $60/£60, while the BlackWidow Lite goes for a fairly reasonable $100/£100. Likewise, the Goliathus can be snapped up for $35/£35.

All in all, then, it’s not too expensive for quality kit. Dave’s wife says that it makes him look “ridiculous”, but at least it means his allegiance is clear. He hears you’re 98% less likely to be Force-choked by Darth Vader that way. Who’s got the last laugh now, Susan?