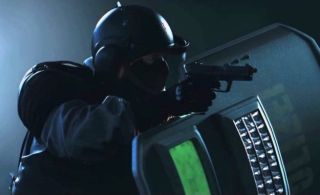 Blitz is busted. I haven’t always felt this way, but it has always been true. Of all 46 Rainbow Six Siege operators, nobody has a more confounding history than the shield-bearing attacker who blinds enemies if they get too close. Depending on who you ask, he’s either one of the worst operators in the game or so good he’s unfair.

Ubisoft has been tweaking Blitz (and his eyeballs) for years in an attempt to make him “less frustrating” to play against while also serving a purpose. A big rework in 2017 increased his movement speed and let him keep his shield up while sprinting. In Ubi’s eyes, this allowed him to finally “blitz” the competition.

Previously, doing well with Blitz relied a lot on your positioning and hoping an enemy wouldn’t shoot your feet before you could close the distance. But New Blitz could suddenly rush into a room with ease. He was terrifying and clearly overpowered. Soon after, a nerf slowed him down to a manageable speed, but he was still too frustrating. Another nerf early last year took away one of his flash charges and reduced the range on flashes by 3 meters. In the latest Burnt Horizon patch this month, his cooldown between flashes was dramatically raised from 2 to 7 seconds. As expected, it still hasn’t fixed the problem. So why does nobody ever seem happy with the current Blitz?

Partly, it’s because shields have problems across the board. Ubisoft recently identified an issue with camera sync on shield ops that allows the user to be shot even when they’re blocking bullets from their perspective. That’s being worked on, but there’s a larger balancing problem. Shield melee is wonky. Solid hits sometimes don’t work and other times clear misses hit their mark. Siege’s melee is meant as a last resort in combat, but for shields it often becomes a primary weapon. Countering a shield requires swiping it away with melee and exposing the operator to attacks. This has always felt awkward and doesn’t fit Siege’s usual careful, considered approach. And it’s often a mess, as you can observe above.

Blitz’s biggest problem, and the one that Ubi has failed to meaningfully address, is that his fundamental premise is flawed. He relies completely on an all or nothing approach—if I can get close enough to blind you, I will almost surely win the fight. If not, I’m probably dead. That is frustrating for both sides. It sucks to be completely blinded (and subsequently killed) because Blitz suddenly rushed around a corner. It equally sucks to be forced into a long range fight as Blitz, who only carries a pistol.

Other Siege operators that have existed in this all-or-nothing territory have been substantially reworked. Before Kapkan’s rework, one step into his traps was instant death. Thatcher’s EMP grenades used to destroy all electronics, but now temporarily shut off cameras. Caveira’s pistol damage was lowered from 99 to 64 because she was frustrating to play against. In the future, Ubi wants to rework Frost’s Welcome Mats for similar reasons.

There’s one shield operator that isn’t frustrating in the same way—Clash, coincidentally the only shieldbearer to be added after launch. Her shield protects her entire body and she can’t shoot or melee when it's equipped. It’s not frustrating to fight Clash the way it is Blitz because she is deliberately designed to bypass the technical issues with shields and avoid extremes. No weird melee hits or instant kill scenarios. She can be easily overwhelmed without teammate support, but that’s a fair deal.

Fights shouldn’t boil down to whether or not Blitz got close enough to blind his prey. The best operators have nuance. He needs a full rework or temporary removal from the game, not small changes that maintain the status quo.

This is what I would do to Blitz to make him less frustrating while maintaining his aggressive nature.

That’s one interpretation of how to improve Blitz, but I’m sure there are other options. Reworks are a tricky tightrope to walk. Kapkan V2 is a more interesting and versatile take on his original vision. Lion’s recent rework successfully made his map scan less intrusive, but he’s also boring as a result. I believe the devs can thread the needle to fix Blitz, but they first have to acknowledge that he’s broken.