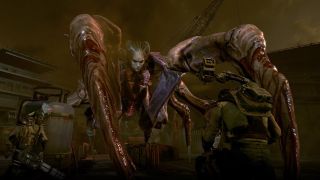 The Phoenix Point Reddit AMA was destined to be dominated by criticisms and questions about the recently announced Epic Games Store exclusivity deal. It's become par for the course for the mood to turn sour after these announcements. Julian Gollop used the opportunity to defend the decision and clarify a few misconceptions.

The lead designer and X-Com creator explained that the deal with Epic allows the studio to commit more to the launch, as well as enabling it to support the game more immediately after launch. Ultimately, he says, it will result in "a better game", and one that gets post-launch additions sooner.

One of the points of contention among backers was that they'd been expecting a key for Steam or GOG, the latter being especially important for those looking to avoid DRM. Gollop confirmed that Steam and GOG keys would still be given to backers after the exclusive year is up, and that the Epic Games Store version would be free of DRM. You can run it without the launcher, or you can stick it in your Steam library if you just want all your games in one place. This is the case with other Epic Store Games, too, like Subnautica: Below Zero and Metro Exodus.

Backers will also receive a whole year of DLC, split across three DLC packs that include new storylines, factions and mechanics. The first will have a seabase and new missions. They might be worth redeeming that Epic Games Store key for, but if you don't, you'll still get that DLC with the GOG and Steam keys a year later.

If you'd rather not use the Epic Games Store at all, refunds are available.