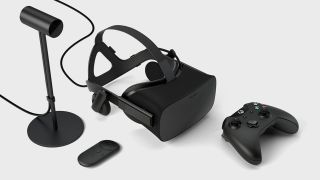 Oculus Rift preordering began today, at a heftier-than-expected price tag of $599. That's a fat chunk of change no matter how you slice it, and a little disappointing too: Remember in 2014, when Oculus VR co-founder Nate Mitchell said the company wanted to keep the device in the $200-$400 range? But shortly after the price was revealed, Mitchell's fellow founder Palmer Luckey took to Twitter to say that the final price is “obscenely cheap” for high-end VR hardware.

To reiterate, we are not making money on Rift hardware. High end VR is expensive, but Rift is obscenely cheap for what it is.January 6, 2016

The price could go even higher, depending on where you live. It's $849 here in the Great White North, for instance, which is just about dead-on equivalent to the US price, and Aussies for some reason get it for $649—that's $460 US, which makes me think it's either a mistake or that Australian buyers are being charged in US dollars. (I've asked.) But the UK has to pay £499—$730—and other European nations will need to fork over €699, which bumps it up to $754.

Luckey defended the higher European prices as the result of being required to include various taxes that aren't part of US pricing. “In fact, some countries are getting a slightly better deal than the US, all things considered—remember, we have per state sales tax,” he tweeted. In a conversation with Totalbiscuit, he added, “European cost is because we are required to include taxes. We are not unfairly inflating the price like many consoles.”

As for why the cost is so much higher than originally anticipated, Luckey told Polygon that the Facebook buyout gave the company the resources it needed to really start pushing the boundaries of the hardware, which naturally led it to become even more ambitious. “What came out of that were the prototypes that became Crescent Bay [a prototype for the retail version of the hardware], and when we compared what we had to what we were making internally it was such a huge difference," he said. "It was hard to look at what we had made before and say yeah, this is consumer ready, this is what everyone is going to want... We decided, in the end, to optimize quality over cost.”

Oculus Rift headsets were initially expected to begin shipping in March, but have now been pushed back to May.