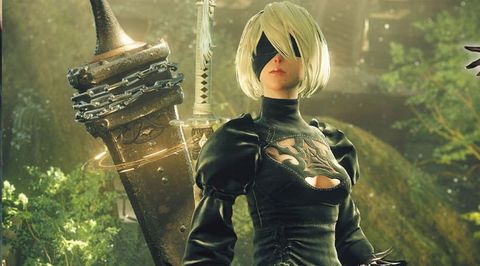 On a ruined Earth, the last fragments of humanity are locked in an endless war with a robot army. Controlled by a mysterious alien intelligence, these machines have conquered the planet and driven the survivors to flee to a base on the Moon. From here, in a facility known as the Bunker, mankind wages war on the invaders using machines of their own. Androids are sent to the surface to work with local resistance fighters and battle the machines. And one of these androids is the protagonist of Nier: Automata, a powerful combat model designated YoRHa No.2 Type B, or 2B for short.

Automata is a sequel, but you don’t need to play the original to understand it. Which is for the best, as it was never released on PC. There are some references that fans of the first game—which has become something of a cult favourite—will appreciate. But otherwise it’s a standalone story that you can dive into with no prior knowledge. It’s a lightweight open-world RPG with a heavy focus on challenging combat, which is where developer PlatinumGames makes its presence felt. This is the talented Osaka studio behind the likes of Bayonetta, Vanquish, and Metal Gear Rising, and its distinctive brand of deep, stylish combat elevates Nier above most third-person action games.

When 2B engages an enemy, she explodes with dazzling, violent energy. Whether she’s fighting with a long, elegant samurai sword or a pair of chunky metal gauntlets, the animation is remarkably fluid and graceful. Combinations of heavy and light attacks reveal an impressive range of moves, including many where she flings her weapon as a spinning projectile. Every weapon, from colossal greatswords to nimble spears, has its own suite of attacks, meaning there’s a lot of nuance to uncover. And weapons even have their own backstories, revealed as you spend money and materials on upgrading them.

As an enemy attacks its eyes flash red, which is your cue to block or counter. But the timing is a lot more forgiving than other Platinum games, giving you a generous window to respond—at least on normal difficulty. You can launch enemies into the air too, which only adds to the head-spinning number of combos you can pull off. But while there is a lot of scope for high-level mastery in Automata, you can still finish and enjoy the game using only basic combos. And if you’re in it purely for the story, exploration, or RPG elements, you can use special items in easy mode to automate the trickier parts of fighting.

But it’s not all combo-based melee brawling. Sometimes, without warning, the camera will suddenly lift into the air, or shift to a side-scrolling position, and the game will turn into a twin-stick shooter or platformer. It’s a little gimmicky, but adds to the game’s chaotic unpredictability. It does, however, mean that a controller is pretty much a necessity. You can muddle through with a mouse and keyboard, but in the same way you can eat a bowl of soup with a fork. These shooting and platforming sections—and pretty much everything else in the game—have clearly been designed with a gamepad in mind.

A customisation system based around items called plug-in chips adds further depth. 2B comes pre-installed with a few of these, which govern basic functions like the HUD, mini-map, and objective markers. But it’s when you start finding attack, defence, and support chips that things get interesting. One increases your attack power if your health is at 25% or less. Another increases the damage of your pod, a floating robot that you can aim and fire like a gun. And some are more utilitarian, like increasing your movement speed. By mixing and matching these you can create a 2B tailored to your play style, and even have multiple custom loadouts that you can switch between on the fly.

But chips use up memory, and you can only have a certain amount activated at any one time. Which is when you might consider removing the minimap or XP bar to squeeze in a more immediately useful one. But whatever you do, don’t remove your OS chip—or accidentally sell it to a vendor like I did—because 2B will die and you’ll have to pray you saved recently. The game’s full of quirky touches like this, and there are a number of slightly comical ‘endings’ triggered by making mistakes, interacting with certain things, or wandering in the opposite direction of a task that needs your immediate attention.

But as much as this is a game about blistering combat, there are quiet, reflective moments too, and a twisting, surprisingly emotional story to follow. As 2B and partner 9S wander the shattered Earth, they take in a huge variety of locations. You begin in a crumbling, overgrown city, then move to a sweeping ocean of sand dunes, before finding yourself in an old amusement park populated by friendly robots in clown costumes. One of Nier’s greatest strengths is its unpredictability, and you’re never quite sure where it’s going to take you next. This is not the brown, ravaged world seen in a lot of post-apocalyptic fiction; in some areas, like the Forest Kingdom with its cascading waterfalls and shafts of golden sunlight pouring through the trees, it’s almost idyllic.

I was genuinely stunned when I first left the streets of the ruined city and set foot in that wide, open desert. It gives you an exhilarating sense of scale and freedom, and I love how you can surf on the sand dunes to get around quickly. The sudden shift in scenery is a bit jarring, to the point where the world feels like a load of wildly different environments unnaturally slotted together. But the impact of turning a corner and seeing something totally unexpected makes up for it. There’s a haunting, melancholy atmosphere throughout Automata, and the post-apocalyptic environments play a big part in evoking the hopelessness of humanity’s struggle to reclaim and rebuild its homeworld.

Incidentally, this is a really sad game. The war with the machines seems endless, and the people you encounter in the safety of towns and resistance bases on the surface have their own tragic tales to tell. There are dozens of side mission scattered around each zone, and most of them are tinged with sadness. There are glimmers of hope, but most of your time is spent wallowing in the gloom of a fallen civilisation. But, at the same time, there’s a strange beauty to the game’s tone that gives it a curiously unique personality. As you might expect from a Platinum game, it goes in some very weird directions, and some moments in the story are as disarmingly heartfelt as they are bizarre.

Sometimes the robots you encounter will have strangely human qualities, and you’ll see some attempting to mimic our behaviour or even displaying emotions. Which makes killing them all the more sinister, because you suddenly become aware of the fact that, perhaps, they’re more than just mindless killing machines. This factors into the story in a few interesting ways, and makes you question some of 2B and her operators’ actions. And the story only gets more complex and surreal as the game goes on, and even bleeds into multiple playthroughs. The first ending is really only a prologue to something greater, but saying any more is venturing into dangerous spoiler territory.

Automata is a remarkable game with an incredible amount of style, personality, and flair. Its tendency to repeat enemies, locations, and bosses can dampen your enjoyment, however, and the PC port isn’t great. Cutscenes are locked to 30fps, which make them look distractingly jerky. The mouse cursor kept appearing in the centre of my screen. And on one test machine running an AMD card, the game crashed to a white screen every ten minutes for seemingly no reason. A game this interesting deserves a better port, frankly. But tech woes aside, this is one of the most unique and compelling action games on PC.