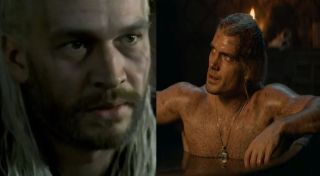 Netflix isn't the first time Geralt's gone on a television adventure. Before he was even a videogame hero, he starred in an almost-forgotten Polish TV version of The Witcher in 2002, called Wiedźmin and usually translated as The Hexer. It doesn't have a great reputation, but that's not entirely its fault. The only official English-language release is a feature-length movie stitched together out of pieces from several episodes, like Frankenstein's monster but with more beheadings, and the full 13-episode series is only available with fan subtitles, popping up on YouTube irregularly.

That translation isn't great. "You have frend! Me!" is a real thing someone says, and the very serious scene where an elven rebel explains their motives to Geralt is undercut by the subtitle: "That's why we fights!"

And yet, somehow it's not all bad. Wiedźmin may not have the special effects budget of Netflix, after watching the two and comparing, there are some areas where the cheaper show is actually the equal of its bigger, more muscular cousin.

Fidelity to the books

The Polish series: Neither TV adaptation is 100 percent faithful to the books, but both versions capture their spirit in different ways. The Hexer's biggest change is that it opens with Geralt's childhood, beginning with Vesemir showing up and invoking the Law of Surprise to collect him. We see young Geralt being mutated and trained, so we get an understanding of his abilities at the same time he does, as well as knowing what a Child Surprise is well in advance of it being relevant.

Getting into The Witcher for the first time? Further reading:

It's a different idea of witcherdom to the books, however. For starters there's a witcher school for girls nearby, and in this telling the Witcher Code is a real thing rather than an excuse Geralt improvises when he doesn't feel like taking a job. In this telling he's one of the only witchers to follow their Code, with the majority of the others turning mercenary.

And while The Hexer does adapt several of the short stories straight, others are cut brutally short—even compared to the abbreviated Netflix versions. Eternal Flame, the short story introducing the doppler Dudu, is trimmed to a couple of scenes and then tacked onto the beginning of another, The Edge of the World.

Netflix Witcher: The biggest change in Netflix's version is making Ciri and Yennefer central characters right from the start, rather than waiting until Blood of Elves (the first novel) to give them their own storylines. It means the timeline jumps around a lot, which is a fun puzzle to keep track of, and fleshing out the spare mentions we get of Yennefer's early life makes her a more relatable character.

The insistence on keeping Geralt and Ciri apart until the end does mean the Brokilon Forest section is a bit perfunctory—it's never even revealed what the dryads do with the girls they lure into the forest in Netflix's version—and their first meeting at the season's climax isn't as emotional as their reunion in the story it's adapted from.

Compared: In both shows the changes are in service of different ends, and make sense for the themes they're focusing on. This one's a tie.

Netflix Witcher: I love Toss a Coin to Your Witcher. It's catchy as hell even though it sounds like a 90s pop power ballad. It fits the Netflix version of Jaskier, who is ahead of his times in general, with a face that looks like it has opinions about Ed Sheeran. He always seems to be five seconds away from launching into Wonderwall. He's great.

But ignore that one killer song for a second. Whenever something with lyrics plays over Netflix's end credits it turns out to be a song that should be soundtracking a YouTube compilation of Favorite Anime Moments and not a major TV fantasy series. And though the bits where the instrumental music references the soundtrack of The Witcher 3 are cute, most of the ambient music is forgettable.

The Polish series: The Polish soundtrack is more authentic. Maybe if I spoke Polish the lyrics would annoy me as much as that song about Yennefer's sweet kiss, but I don't, so it all sounds wonderful to me. And the background music, though it gets recycled a lot, is memorable—all big drums and farty horns. It's distinctive, and gets you in the mood the moment you hear it.

Netflix Witcher: Henry Cavill's obviously perfect as a very videogame-influenced Geralt, able to get across everything you need in a single grunt. I've already gushed about Joey Batey's Jaskier, but Anya Chalotra as Yennefer and the double team of Jodhi May as Calanthe and Björn Hlynur Haraldsson as Eist are perfect too.

There's nobody I'd say is badly cast. No, not even Triss, who is well-suited for the role she's given here—a rare actual good person written into the striga story to motivate Geralt into pursuing a cure, and providing a contrast to Yennefer at Sodden. Shout out to Mahesh Jadu, the actor playing Vilgefortz, who only shows up in the final episodes and is immediately captivating.

The Polish series: Meanwhile in Poland, Michał Żebrowski eventually won me over as a deliberately different version of Geralt—one who is differentiated from his witcher peers by being more in touch with his emotions, and whose cynical mask slips much more easily. A Geralt who smiles, basically. The one actor you might recognize in the Polish version is Zbigniew Zamachowski, star of Krzysztof Kieślowski's Three Colours: White, who plays a slightly older and more worldly Jaskier. Though his interpretation is different, he's clearly having fun with the role.

Compared: The Hexer does suffer from some secondary characters who stare at the camera like it's their first time in front of one, and Téa and Véa are both played by white ladies in brownface so that's not great. Netflix is stronger in its supporting cast.

Compared: Poland has a huge advantage here, in that it's Poland. It's what the world of The Witcher is supposed to look like. The Netflix version can afford to film on location all over the world, which means they can jump to an actual desert when necessary, but it feels like a patchwork of disjointed cool-looking places and doesn't cohere in the same way.

It's good at giving a sense that the south is a bunch of tiny kingdoms that, with the wind at your back, you could spit across two of, but it doesn't feel real in the same way. Meanwhile, every castle in the Polish version is just an actual castle and looks perfect without a bunch of digital color grading applied to it.

Compared: Huge and obvious advantage to Netflix here. The monsters look cool, the spell effects are sometimes a bit familiar but always competent, and everything looks like money. The Polish version has terrible CG even for its time, with the dragon in particular looking like something out of a kid's show. The puppetry isn't much better, and there are a lot of scenes where Geralt has to fight some swamp beast which just involves the poor actor thrashing about in the water pretending some hose pipes are trying to murder him. Which brings us to...

Compared: Another easy win for Netflix. Sure, its version of the Butcher of Blaviken scene doesn't look much like it's happening at a market but who cares, Henry Cavill straight-up murders those dudes in seconds and it rules. I didn't notice on the first watch, but you can even see him deflect a second crossbow bolt between swording two guys. Every fight scene has something cool about it, and they're often brutal and full of sudden death right out of nowhere.

Meanwhile in Poland, they try to communicate that Geralt's super stealthy and a bit magic by having him turn invisible during the Blaviken fight. It looks hokey as anything. They didn't have the money for even the smaller fight scenes, and certainly not for big battles like the Cintra versus Nilfgaard clash.

Compared: OK, Poland wins here. Both shows have some solid costuming, but only in the Netflix version do the Nilfgaardians look like joke guards from a fantasy parody. Even their helmets look like knob-ends. They're hard to take seriously, and yet the story relies on them being terrifying.

Even counting the armor against it, Netflix's Witcher comes out ahead. It has a lot of advantages right out of the gate, and it makes the most of them.

Still, it would be great if the swelling of interest in all things Witcher meant we finally got an official English-language release of The Hexer, because it's worth a watch in spite of its flaws. The farty horns of its theme tune deserve a wider audience.