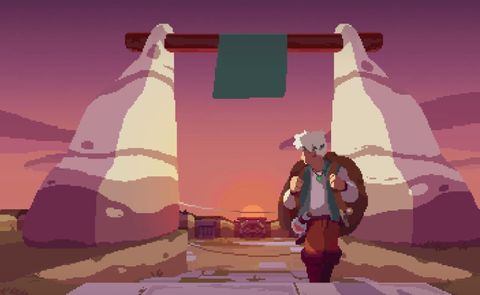 Moonlighter is a cute and casual revival of an uncommon mashup but doesn’t stick around to push the boundaries.

As a couple of green slimes distract me, a flying razor-blade golem slaughters me on the third level of the aptly-named golem dungeon. My bag full of expensive iron bars and golem cores spills onto the ground with my life, with the exception of the five treasures I meticulously chose to place in the top row of my inventory grid. I was one room away from the boss before being unceremoniously tossed face-down outside the dungeon entrance. It sounds like a frustrating, wasted day, but that it isn't is my favorite aspect of Moonlighter.

I put those five remaining items on sale in my store the next morning, which nets me 20,000 gold. It’s a good profit for the current state of my shop. Moonlighter uses this slap on the wrist style punishment often, admonishing me for my arrogance without making me feel too sorry for it. The permissive attitude fits with Moonlighter’s (relatively) short completion time, making for a quick dip into the roguelike genre rather than the usual swim through a riptide.

Moonlighter is the unlikely intersection between roguelite dungeon crawler and shop simulation that many will recognize as inspired by Recettear, the 2010 indie game from Japan that originally popularized the combination. Will, the protagonist and proprietor of Moonlighter, spends days tending his shop and nights exploring the town’s procedurally generated dungeons. Some town elder named Zenon predictably cautions Will against his heroic dreams, encouraging him to keep his nose down and make a living. I say: You do you, Will! Live your passion and don’t let any old guy stuck in his ways tell you that you have to work in customer service the rest of your life!

Will’s dream is unlocking the fifth dungeon door in his hometown Rynoka by obtaining four keys held by giant monsters in the basements of four other dungeons. Each day is split between the two primary objectives: adventuring and merchandising. At night, I enter one of the four themed dungeons, beginning with the golem dungeon and progressing each time I defeat a boss. The enemies on each floor have attack patterns that I was quick to learn, but become more challenging to track as ranged beam attacks intersect with the cadence of golem soldiers swinging swords. I was tripped up regularly, but rarely to deadly consequence.

Each dungeon, though generated new every day in roguelike style, is only three floors deep before the area’s boss, a longer fight that focuses on recognizing and anticipating a suite of dangerous attacks. The three floor structure makes death fairly stress-free. Dying on the boss’s doorstep means only 10 to 20 minutes of setback.

Combat itself is fast but not frantic. Each room takes a quick second of evaluation to determine who should be taken out first. I alternate between rolling away from attacks and darting in to poke an enemy to death with my spear. A combination of ranged and melee enemies in a room means a bit more rolling or darting behind rocks and obstacles to dispatch sword-wielders first. Moonlighter has keyboard support but recommends using a controller, a suggestion that I’ll echo for the sake of precision. The combat is all about moving around the room efficiently, easier to accomplish with analog sticks than keys in my opinion, and I get a flash of pride any time I manage to roll and dance circles around monsters without taking any damage.

Back in town, Will has the option to invest gold into Rynoka to bring various merchants in. The blacksmith upgrades weapons and armor with two possible upgrade paths for each item. The witch sells gear enchantments and consumable potions. A retailer, hawker, and banker make up the rest of the possible Rynoka main square. The depth and variety of combat upgrades are modest, another earnest but cursory exploration of dungeon-crawling.

Running the shop is not so tedious as a chore but not quite demanding enough to pose a challenge. In the morning, I put my hard-earned haul on display and set the prices for each item before opening for the day. Customers come and go, examining the merchandise for fair prices. Villagers react to each item they examine, hinting whether the price is fair or outlandish. As the short day changes from morning to night, I run about adjusting prices to customers’ taste, restocking, and standing at the register to press a button accepting each villager’s purchase. I occasionally have to sprint out from behind the counter to waylay a shoplifter by slide tackling them before they can make off with my goods.

There's not much to the pricing game. My time was best spent pricing high and backing down until customers were willing to buy. After finding an acceptable rate, I didn’t have much incentive to ever change it, typically selling each of my items at their most recent purchase price. The most satisfying moment is when, after backing down my price several times, a customer finally gives a good reaction and walks to the register. The profit earned is a more enticing reward than ‘winning’ the interaction. Discovering which items are most valuable entices me to hunt down precisely the monsters that drop them and adds higher stakes to properly managing my inventory while in the dungeon.

One of Moonlighter’s best systems is one that I initially wrote off as a gimmick: its inventory management. With limited space in my bag, prioritizing which items are worth holding on to and bringing back to the shop is key. On top of the usual inventory Tetris are the many item curses which dictate where in the bag they must be placed or effects they have on the items around them. One item curse sends an item adjacent to the cursed one back to the shop immediately after being placed. Other curses destroy adjacent items or turn them into a different artefact entirely. There’s a sense of pride in clearing half my inventory with intelligent use of curses, and losing a well-planned layout is more of a tragedy than the lost profit.

Moonlighter is, as far as roguelikes go, a quick jaunt. With four main areas and one final dungeon, my progress was only diverted to deal with my obsessive trips back to town to sell a pack full of loot to buy better weapons to fly through the dungeons faster. Despite its standard difficulty being called “hard” (and hardest being “very hard”), it isn’t excessively challenging. I say so with confidence because I’m typically a complete embarrassment in hack-n-slash combat, but even I made progress at a steady clip while turning a tidy profit. I died a couple times on “hard”, but more often due to negligence than difficulty, and I was never set back by more than an (in-game) night. The forgiving death penalties are as much part of Moonlighter's personality as the muted color schemes and plucky soundtrack.

Moonlighter is meant to be completed and set aside, not mastered and repeated like other, harsher roguelikes. Neither of its activities, the dungeon diving or shop management, are as complex or harrowing as other examples of either game type. I expect some will see this as a shortcoming. Personally, I seldom have the patience for obsessively deep hack-n-slash combat or ultra data-driven shop management. Moonlighter cuts just beneath the surface of both genres to let me enjoy the flavor of a roguelike without a lifetime commitment.

Moonlighter is a cute and casual revival of an uncommon mashup but doesn’t stick around to push the boundaries.