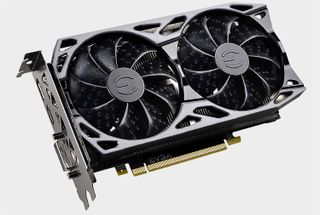 It's amazing what a little competition will do, particularly in the tech space. Competition is part of what drives innovation, and it often benefits consumes with better pricing. I bring this up because it looks like a price war is brewing between AMD and Nvidia in the GPU space. Or at the very least, a mini skirmish.

One of Nvidia's staunch allies, EVGA, announced two new GeForce RTX 2060 models at CES. They're dubbed KO and KO Ultra, and combined with the aggressive pricing, it looks like these are intended to deliver a 'knockout' punch to AMD's recently announced Radeon RX 5600 XT. EVGA doesn't explicitly say that, of course, but there's little doubt what "KO" stands for.

"The new RTX 2060 KO enters the ring with a ONE-TWO Punch to any contender willing to step in. EVGA GeForce RTX 2060 KO and RTX 2060 KO Ultra  are the new editions to EVGA’s RTX line up. Experience superior cooling, superior overclocking, and superior performance," EVGA says.

Meanwhile, AMD has introduced the 5600 XT at $279, and it looks poised to outperform Nvidia's GeForce GTX 1660 Ti. We'll know for sure how it compares once we get a chance to put the 5600 XT through our gauntlet of gaming benchmarks, but from AMD's perspective, the 1660 Ti is what the 5600 XT is going up against.

That all changes if the RTX 2060 drops in price. Maybe Nvidia has done exactly that and given EVGA a head start over its other hardware partners (as a reward for only selling Nvidia GPUs), or perhaps EVGA is leading the charge. Either way, EVGA just reshuffled the playing board, and it would be shocking if other participants didn't respond in kind.

In the meantime, we're already seeing cheaper RTX 2060 options emerge, albeit with mail-in-rebates and coupon codes. A couple of examples:

Most RTX 2060 cards are still priced at $349 and up, but maybe not for long. One thing to note—the RTX 2060 has not been discontinued even though Nvidia refreshed its lineup with an RTX 2060 Super. So, this is not a case of EVGA clearing out RTX 2060 inventory by selling cheaper KO models.

In a subsequent interview with HotHardware, AMD's Scott Herkleman said this was the strategy all along, that AMD baited Nvidia into playing its hand (the discussion begins at the 25m35s mark). So who knows, maybe the same thing is playing out again and we'll see the 5600 XT debut at a cheaper price than announced.