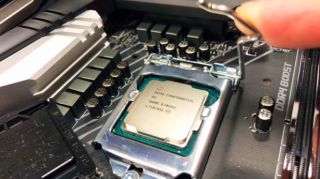 Intel's future processor lineup has been in limbo for a while now—the company has been facing product shortages while continuously delaying its 10nm CPUs. Thankfully, it looks like CES might bring some interesting launches from Intel, if leaked information is to be believed.

Weibo user MebiuW posted what seems to be an internal document from Intel, showing performance information for the unreleased Core i9-10900K processor. Compared to the 9900K, the Comet Lake CPU supposedly has a higher 125W TDP (vs. 95W) and ten cores (vs. 8 cores). Depending on pricing and performance, it could soon join the ranks of the best CPUs for gaming.

As is to be expected, the performance graph uses data from benchmarks typically kind to Intel—SYSmark, SPEC, XPRT, and so on. The most drastic increase over the 9900K comes from the SPEC benchmark, with a 30 percent increase reported. Cinebench R15 also closely follows, with a 26 percent rise in performance.

Interestingly, XPRT results on the 10900K only average about 3-4 percent higher than the same tests on the 9900K. Because XPRT measures single-threaded performance, it seems like Intel has slightly raised the core clock, compared to the 9900K. There's still some mileage left in Intel's 14nm lithography, apparently.

We expect additional details of Intel's upcoming Comet Lake processors to be unveiled at CES 2020 next week. Besides support for two additional CPU cores relative to Coffee Lake (10-core/20-thread instead of 8-core/16-thread), Comet Lake is also expected to require new 400-series chipsets and motherboards.

Based on these rumors, it looks like Intel and AMD will largely be in the same place moving into 2020. Intel will continue to lead in single-core performance, while AMD will continue its focus on multi-threaded workloads.