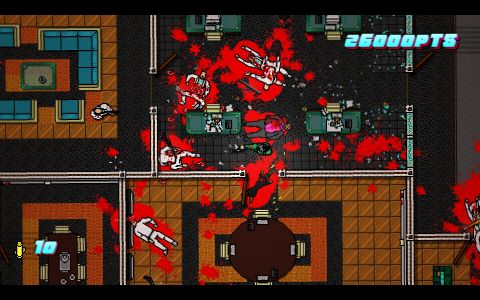 Restrictive design decisions sap the energy from a series that revels in it, and technical issues deal the killing blow.

The original Hotline Miami was brutish, nasty, short. Its basic vocabulary was elegant enough to support a score-attack videogame but loose enough, creative enough to make you feel like that wasn't entirely the point. It was a marriage of Robotron and Lynch, Pollock with a machete going through the comedown of a century. It was about turning ugly uglyness into beautiful uglyness. If you lacked the hyperacute reflexes necessary to score an A grade in every level, you could still chase that feeling. Despite the bad-trip aesthetic and the bloody cruelty of it all, it actually represented a kind of harmony: pop art enhancing a game, a game enhancing pop art. It's a classic for that reason.

Hotline Miami 2: Wrong Number is not a classic. Nor is it—and as somebody who loved the original, this is a tough admission—a particularly good game. This is despite it being, in many ways, more or less the same game. You slam through doors and send Russian mobsters sprawling to the floor. You kick their heads in, grab their knives, shank the next guy, throw his pipe through a window, shotgun a dog, turn the wrong corner, die in a hail of gunfire, hammer 'R', do it again, hammer 'R', do it again.

Hotline Miami 2's problems span the entire game, from its overall structure to its plot, the decisions that have been made regarding player characters, ability-modifying masks, and level design. It certainly amounts to more Hotline Miami—it is substantially longer than its predecessor, taking me eleven hours to reach the end—but it's worse Hotline Miami. If the original game was the movie Drive—a seductive pop cultural moment, shallow but resonant, a crystallised mood—then this sequel is Nicolas Winding Refn's poorly-received follow-up, Only God Forgives. More complex but less powerful.

The game offers substantially more plot detail, too, but this is tied to characters who don't have character and events that don't have meaning. Dialogue is stilted and relationships boil down to gestures. The constant shifts in time and perspective suggest an attempt to recapture the first game's sense of strange, but it's too convoluted to amount to a similarly seductive solipsism. Hotline Miami 2 simply doesn't have anything to add. It's an ambitious, Lynchian superstructure surrounding a not-particularly-interesting crime fable.

When it tries to be more than that, it stumbles. The first decision you're faced with is the choice to enable or disable scenes of sexual violence: then, in the prologue, there's a suggested rape by your character that turns out to be a scene from a video nasty (or does it, and so on). Sexual violence does not occur again after that point, and its inclusion adds nothing, says nothing, and plays no role in the overall plot. It's artless and alienating, and giving the player the choice to switch it off suggests a lack of confidence in the entire idea. If it's unnecessary enough that it can be removed without consequence, why include it?

The first casualty of this problematic structure is atmosphere, but the second and more serious is combat. Characters are differentiated with hard playstyle restrictions. Where masks previously added subtle perks that encouraged experimentation, here they dictate much about how you approach a level. One character carries a gun that can be switched for a knife at any time. He can't pick up dropped weapons at all, and if he runs out of ammo he needs to restock at scarce ammo crates. This turns Hotline Miami 2 into an entirely different game—and a worse one. Imagine the frustration of facing down an enemy that can only be wounded with bullets while playing as a character who is out of ammo but isn't, for some reason, allowed to use the guns that are right there. That's Hotline Miami 2.

One group of characters does use masks, but each mask represents a different character and, similarly, they each have a substantial effect on how you play. Another character earns mask-esque upgrades but, disappointingly, several of these overlap with other characters in the game. One character fights non-lethally (mostly) and will discard bladed weapons or firearms that you try to pick up. The best characters, in this scenario, are the ones that use no gimmicks at all—because it's only then that you get to play with all of the game's systems, and it's those systems that make Hotline Miami what it is. This is not simply a shooter or a stealth game or a brawler: it is at its best when it is a freeform combination of the three, and when that freedom is placed in the hands of the player.

When you do have that freedom, you run up against level design issues. There are sequences that capture the original's grueling, rewarding sense of escalating power and violence, but far more that entirely frustrate. The use of guns is frequently mandated by the placement of melee-proof enemies, long sight-lines and distant snipers. This is the case even when you're not being forced to use particular weapons. You spend far more time edging around corners taking pot-shots at out-of-sight enemies than you should do in a Hotline Miami game.

This more restrictive design means that twisting Hotline Miami's basic systems is the most reliable way to progress, and this, in turn, draws the eye towards longstanding unresolved bugs, inconsistent AI, and flat-out instability. I have encountered, reliably, mission-critical items falling outside of the play area; invisible walls forming behind certain open doors; dogs spinning on the spot, forever; guns firing through people. Enemy behaviour is all over the place. You can fire a gun in one room and alert enemies half a level away but not the guy next door. Dogs can't be hurt while turning corners. Gunmen won't see you through an open door if the door is open just so. One tough five-stage midgame mission crashed three times on the final section, forcing me to play the entire thing over from scratch every time. I have never been more relieved to see the words 'Level Clear'.

There is still, however, power in those words, and I pressed on through the campaign partly because I had to and partly because I was so angry and disappointed with the game that I wanted to see it through to the bloody end. The feeling of utter frustration brought about by the new character mechanics and level layouts is, in some ways, a kind of double-edged victory for Hotline Miami overall. I certainly felt like an actual masochist.

There is also a sequence, right at the end, that is so inventive and powerfully presented that it suggests what really building upon the original's basic ideas might look like. It's not particularly interesting mechanically, but you've never seen anything like it. It lasts about three minutes.

There is another, powerful thing the game gets right, and that's the soundtrack. The soundtrack includes almost fifty lossless tracks by artists like Jasper Byrne, Carpenter Brut, M.O.O.N, Perturbator. The experience is enormously enhanced by their work. That crash-prone five-stage mission is accompanied by Carpenter Brut's Roller Mobster, and despite listening to it on the way to work for the last couple of months and having now listened to it over and over during two unnecessary additional attempts at that mission, it's still fucking rad.

It's also a better looking game—a familiar style rendered with a little more detail in the pixel art, more and more nuanced animations, and nice little touches like heads rolling away from decapitated corpses and pixelated blood softening as it touches water. If it wasn't for the narrative and the structure, the art and music would make Hotline Miami 2, overall, a stylistic improvement.

The big picture, though, is one of entirely-dispelled mystique. Did anybody need to know more about the circumstances leading up to the events of the original game? Did Hotline Miami ever need lore? Did you ever wish that you had less freedom to determine your course through a level? I didn't, and I don't. This is not the follow-up that Hotline Miami deserves. Then again, perhaps it didn't need a sequel at all.

Note: Hotline Miami 2 includes tools for users to create their own levels. I've spent some time with them but they're currently marked as being in alpha, and it's far too early to judge how well the community will make use of them. As such, they have not been factored in to the judgement offered here.

Restrictive design decisions sap the energy from a series that revels in it, and technical issues deal the killing blow.