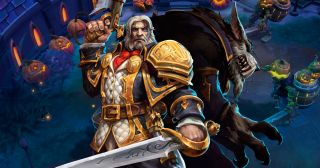 Blizzard has announced that regional qualifiers for the upcoming 2016 Heroes of the Storm Spring Global Championship, the first of three events that collectively make up the new Global Championship Circuit, are now underway. Competitions will run throughout January, February, and March, with the winners headed to a $500,000 battle for the belt that will be held in Seoul, South Korea.

The intent of the new Global Circuit, Blizzard explained in November, is to strengthen competitive esports worldwide through open qualifiers, partnerships with “major tournament organizers” for sanctioned third-party tournaments, and better support for both existing teams and players who haven't yet made the move to the big leagues. And by allowing regional qualifiers to operate under their own independent formats, Blizzard said, “each region can determine the absolute best teams that they have to offer,” ensuring consistently high levels of competition at the top echelon of the pro HotS scene.

The 2016 Spring Global Championship qualifiers will unfold as follows:

Two teams from China, North America, Europe, and Korea will advance to the Spring Championship, while Latin America, Southeast Asia, Australia/New Zealand, and Taiwan will send one team each. The finals will run from April 1-3 in Seoul, in partnership with OGN, with a $500,000 prize pool up for grabs.