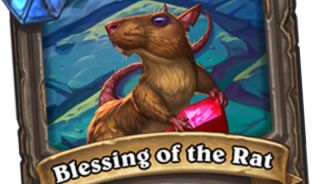 The Lunar New Year will arrive in Hearthstone next week with a new Tavern Brawl called Lunar Blessings, plus eight special themed quests with rewards of gold and dust for those who complete them.

Players will begin the new Tavern Brawl by choosing a class, after which they'll be given a random deck. Then they'll pick from one of three "blessings" that will confer different buffs during gameplay. Behold!

The quests will appear throughout the event, and there will also be Lunar New Year emotes on tap, so you can throw some festive greetings to your opponents. The Hearthstone Lunar New Year event will run from January 29 to February 12.

Hearthstone's latest solo adventure, Galakrond's Awakening, is also now underway—it kicked off yesterday—with 35 brand new cards for players to unlock. The full rundown of what's happening in the epic battle between the League of Explorers and the League of E.V.I.L., including all the cards you can pick up over the course of the event, is up at playhearthstone.com.