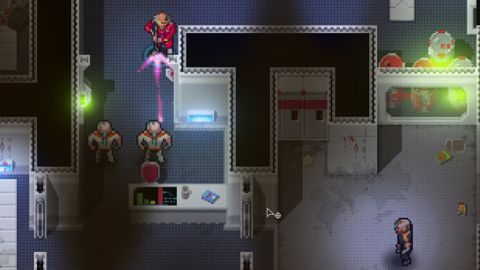 2014 has brought us a tiny surplus of indie, turn-based strategy games. And happily, they've all been thematically and mechanically different: The Banner Saga (an elegant Viking epic), Xenonauts (a spiritual sequel to old X-COM), Dead State (a Fallout-like zombie sandbox in Early Access). Halfway is less complex and sprawling than these games, which ends up as both a shortcoming and an asset.

Halfway leans on sci-fi tropes to start its story. Passengers of a massive spaceship awake from cryosleep to find their vessel, the Goliath, overrun with evil cyborgs and out of control, hyper-jumping to a random spot every few hours. You control the surviving crewmembers, fighting your way deck to deck in a couple dozen combat missions.

Structurally, Halfway reminds me of a 16-bit JRPG: missions are represented as connected dots on a map of the ship, and you complete them one by one, with a handful of optional missions along the way. Between combat, you retreat to a hub to equip new gear, talk with your party, and select who you'd like to send on the next mission. This is the unbroken rhythm of Halfway: combat, plot progression, gear management, repeat. By the time I collected all eight characters, the game's simplicity was wearing thin.

That simplicity extends to Halfway's combat, for better and worse. Your party characters don't have classes, so they're mostly defined by what weapon and armor you give them, but it feels symmetrical with the scale of the game that characters have just a couple stats and just one active ability each. I liked the natural advantages that presented themselves through this system, and that I could choose which characters to invest in along the way. Linda can heal herself without a medkit every few turns, which makes her a natural tank, so I spent every health stimpack that I found on her to increase her maximum HP. The active ability of Morten guarantees a hit from any range, so I equipped him with my best shotgun, giving him the flexibility of sniping with it every few rounds.

Halfway doesn't have difficulty settings or permadeath, but it does achieve that XCOM experience of narrow victory: plenty of my rounds hung on a 62-percent sniper shot connecting with its target. At the same time, I was frustrated by the a few moments when difficulty arose purely as a result of the equipment decisions I'd made or my party composition: two missions surrounded my team with six or seven snipers that couldn't be reached through movement, and I only had two long-range weapons to fend them off with. In situations like these, strategy mattered less than how many health kits I was willing to spend.

What wore on me most throughout Halfway was how unvaried and uncreative the game's enemies are. They're essentially the same from beginning to end, silent robot-zombies that move, shoot, and melee. Worst are the turrets, boring punching bags that soak up damage and grenades and are very overused throughout the campaign. I didn't enjoy using bottlenecks to exploit the AI of these enemies, either, which occasionally let me kill them one at a time on my own terms. Mechanically, there just isn't a lot happening here: something like a fragile, fast-moving suicide-bomber enemy, or an enemy that destroys cover, would've shaken me out of my tactical comfort zone.

Halfway's narrow design makes it easy to pick up for the dozen hours it takes to complete, and it feels appropriately priced at $13. But compared to XCOM or Xenonauts, it's more akin to sci-fi checkers than an intricate strategy game. For anyone daunted by the massive campaigns of XCOM or Xenonauts, Halfway presents a straightforward alternative.

For a breakdown of our review brackets and methodology, check out the PC Gamer reviews policy .