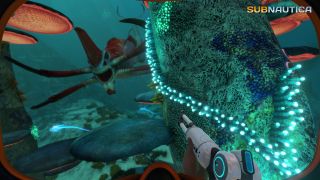 I have a distinct memory from when I was maybe 10 years old of opening my eyes underwater in a lake and not being able to see the bottom. I was gripped with a primordial fear that I now know has a name: Thalassophobia. It is in large part because of this fear that first-person survival game Subnautica remains one of the scariest games I've ever played and its giant sea monsters rank highly on my list of memorable PC game villains.

Subnautica's world is almost entirely covered by a giant ocean. You only get a chance to dry your feet off in a few specific places that creep up above sea level, or if you build an underwater base for yourself. This serves to make the ocean feel mostly inescapable. If something that can swim faster than you is chasing you, where is there to go? Safety might as well be light years away. Add to this the fact the ocean floor might be hundreds of meters below you at any time and your visibility in the brine at night is close to nothing, and you may be able to understand why this game just about gave me a heart attack.

But it wouldn’t really be that bad if you discovered all the visions of ravenous beasts was all in your head, would it? Well, they’re not. Lurking in the depths are leviathans: enormous, serpent-like predators from which you have little chance of escape if you can’t get to a vehicle or some kind of shelter immediately. Even in a submersible, they can take you out if you don’t execute some quick evasive maneuvers.

You usually hear them before you see them, wailing through the gloom in an eerie, haunting, distorted tone. If one of them catches you, you’re usually treated to a close-up of its toothy maw and terrifying, narrow eyes filling your field of view before it eats you alive. Even worse than that, though, were the couple of occasions when I was swimming near the surface and my flashlight caught a glimpse of a white, leathery, serpentine body slither past several meters below me. Oh shit, where did it go? Please just kill me so I can stop hyperventilating! OK, you know what? I’m just going to hit escape and go look at some baby animal pictures.