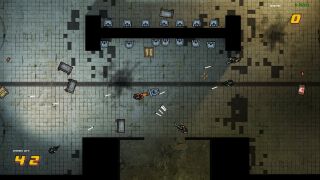 The actual gameplay is straight out of Hotline Miami, but the maps, enemies, and sound effects are taken from Half-Life 2. And instead of the usual assortment of blunt objects and firearms, you're equipped with the gravity gun, which works exactly like it does in HL2: Pick something up—explosive barrels included—and then fire it at your enemies to turn them into pulp.

There are eight levels in all, one for each area in Half-Life 2. For players who are into the DIY thing, it comes with a level editor as well. The soundtrack by Sung is pretty fantastic too. And it's free!

"I made this game as a declaration of my love for these 2 games, and as an experiment in game design," creator Thomas Kole explained.

Grab it—trust me, it's worth your time—at Itch.io.