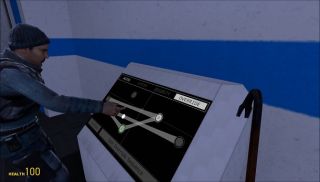 Being a captain in FTL: Faster Than Light is a nerve-wracking experience. Hostile aliens could teleport onto your ship at a moments notice, an asteroid could take out life support, and you're constantly put in horrible situations with no clear solution. The responsibility is simply too great, but luckily a pair of fellow space-goers are working on a Garry's Mod gamemode that lets you demote yourself to the role of a single crewmember.

The mod, called Final Frontier, is a 3D representation of the cruel—but rewarding—roguelike we thoroughly enjoyed last year . Where your ships systems were easy to control from your tactical view, everything in Final Frontier must be managed by human players. Firing weapons, teleporting players, and unlocking doors requires a quick mind and quicker hands at the correct console.

The developers hosted a Q&A to elaborate on what their FTL-inspired mod entails:

“This game is (heavily (blatantly)) inspired by FTL, a game we all enjoyed playing but felt would be improved with multiplayer,” one of the developers wrote. “Unlike FTL, you control a single crewmember in first-person perspective, and must manually perform the tasks that FTL characters carried out by standing at their posts mashing keyboards. How well you perform your job is entirely dependent on the skill of the player at that task.”

The two modders say they're only “prototyping the project in Garry's Mod,” and that they're only testing it internally, but plan to set up a public server once the mod's main features are finished. I suppose I could take this time to look for a top-tier crew that'll fight and die for me without question. Any takers?